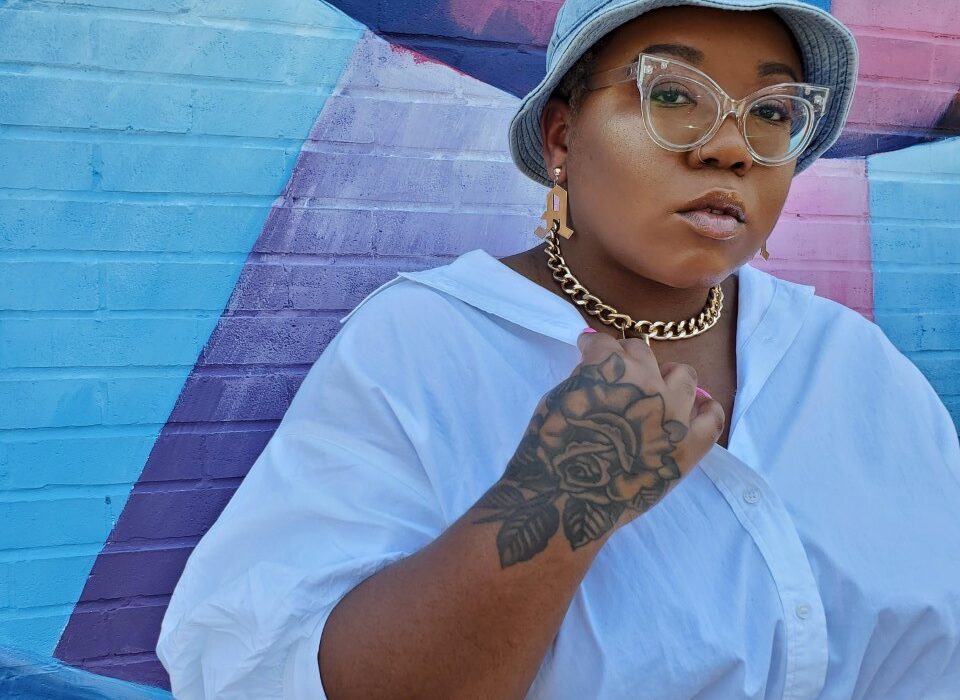 The wind is brisk in mid October on the rooftop of TGI Fridays in Downtown St. Louis.

Fashion influencer and editorial stylist AK Brown, 28, is backlit by the Arch as she stifles back and forth between her next outfit selection. Her photographer Mar’Vette is there too, switching lenses and waiting for Brown to figure out her next move. But she is unsure and contemplates between multiple look variations before her friend Courtney helps her settle on a leather skirt and lunchbox clutch.

Brown’s houndstooth blazer and leather is a vast contrast to the urban parking structure surrounding her. But contrast hasn’t been unfamiliar territory for her as she’s blossomed as a fashion influencer both on and offline.

Born and raised in St. Louis, MO, Brown developed a fondness for fashion and design as a child under the watchful eye of her aunt who would teach her how to sew pillows and other knick-knacks. Around 13 years old, she got her first sewing machine and her mind as a fashionista and creator began to blossom.

Years later, after graduating from Kirkwood High School in 2010, Brown would attend Missouri State University and study Fashion Merchandising and Retail Management to further her goals in the industry. But after a year and a half, she returned home to St. Louis, two days before giving birth to her daughter. Brown would go on to obtain her two degrees however, her mind was filled with thoughts on how she would make it in fashion and carve a path of her own.

After obtaining a master’s degree in Communications with an emphasis in Public Relations, Brown began to recognize the amount of momentum fashion influencers were gaining online. And one day, as she sat on her mother’s couch pondering how she would become the icon she knew she would be, an ad for Blogger.com popped up and her first blog Mind of a Fashionista was born in 2013.

“I didn’t realize what influence was or what it could be, but I realized I had been an influencer before the term was popular,” Brown said. “Good or bad, I’ve seen the effects of my influence over the course of almost 8 years now.”

Brown’s influence extends far beyond social media and into the boardrooms of America’s hottest retailers. With three degrees under her belt and a fiery passion for retail innovation and design, she has spearheaded cold-weather accessory, product development campaigns for FILA, Urban Outfitters, Aldo, and Target and worked with brands like Bobbi Brown, Maybelline, Patron, and Mielle Organics, just to name a few; coordinating everything from manufacturer designs to production.

On the internet, Brown’s fashion and styling influencer persona has become an overnight sensation. Her editorial studio and creative agency AK Brown Studios has been providing high quality styling and creative design to millennial influencers and entrepreneurs across the Midwest. In 2020, she created HautePressPR, a boutique and fashion creative agency offering public relations and branding services. With nearly 10 thousand social media followers and features on Fashion Bombshell Daily and VoyageATL, Brown is taking fashion influencing to a place it has yet to reach.

“Everyone throws around the term ‘influencer’ so loosely but nobody can back up their clout as an influencer,” she said. “I’ve learned that I can.”

One thing Brown has learned is the importance of the black, millennial voice in the industry and the influence it has when dealing with urban consumers. While working for FILA, Brown was one of only two African Americans at the company, and a lack of diversity and opportunity for minorities could be seen throughout the entire fashion world.

“For me, being a black, millennial in the fashion industry, it was hard at times because I felt like my voice was not being heard enough,” she said. “I felt like I was being passed up for a lot of opportunities.”

At times, it was difficult being the only black face in the room while trying to convince her white colleagues what consumers who looked like her wanted. Knee deep in culture, it always seemed her expertise was overlooked or misunderstood.

“In the fashion industry, we’re told what’s trending are white kids who are basically taking aspects of what we have already done culturally as black people,” Brown said. “But it’s only trending because it’s whitewashed.”

Brown is using her influence both on and offline to change this stigma; reinforcing that black voices matter in fashion and blogging. In 2016, she rebranded her platform Just Bloggers: No Explanation. The change allowed her to tap into a nicheless blog market where she could discuss fashion but create a space where creative design and personal values coincide.

“For most people, you’re telling us to write within a niche because that’s what makes you comprehend better but that’s not what we like,” she said. “We want to talk about fashion one day and then talk about Mike Brown the next because that’s the stuff that’s going on in our lives currently. Right here, right now.”

After being laid off from her corporate position during the COVID-19 pandemic, Brown dived headfirst into full-time entrepreneurship, eager to gain the brand notoriety and recognition she deserved. In less than a year she has gained more traction for her brand than in her eight years working in corporate America.

“I am not a religious person but I am very spiritual and whoever God is, they’re trying to show me that this is the time,” Brown said. ‘So maybe COVID was a blessing in disguise for me.”

Her creativity drives her – in fashion, blogging and public relations – as she strives to merge the connection between fashion and branding. Overflowing with passion and manifestations, Brown believes without creativity she would be unfulfilled.

“If I didn’t have anything creative, I would not have purpose,” she said.

Brown is using her creative influence to inspire and bring fashion notoriety back to St. Louis, a place not often mentioned in the industry but that has a lot of influence as a Midwest market.

Like the fashion industry, Brown says she has seen the cliques on the St. Louis scene and feels they deter individuals from coming together. In order to turn the city into a go-to fashion hub, she says a conversation about inclusion and collaboration needs to occur.

“An invitation is not being extended for everyone to come together,” Brown said.

If this were to happen, Brown says St. Louis will catapult to the top, reintroducing and redefining the city’s importance in fashion and beyond.

As a year filled with so much change and adjustment nears its conclusion, Brown is heading into 2021 with a fresh vision and a perfected craft. Recently she secured her first studio, a creative space and showroom providing a place for designers to collaborate and showcase local fashion brands, as well as her own upcoming luxury line LA.1962. By investing in her city’s fashion scene, Brown knows it will make the market more beneficial for rising fashion influencers seeking guidance and mentorship.

While continuing to establish a solid brand built on fashion, influence and creativity, Brown is determined to connect with other fashionista’s like herself and make a special place just for them to create and blossom. For her, the end goal is always community.

“I really want a hub or collaborative effort where everybody can come together and at least know there is a place they can go collaborate with other creatives in the fashion industry,” Brown said. “Especially black creatives in the industry.”

For more information on the AK Brown brand, visit www.akbrownstl.com.