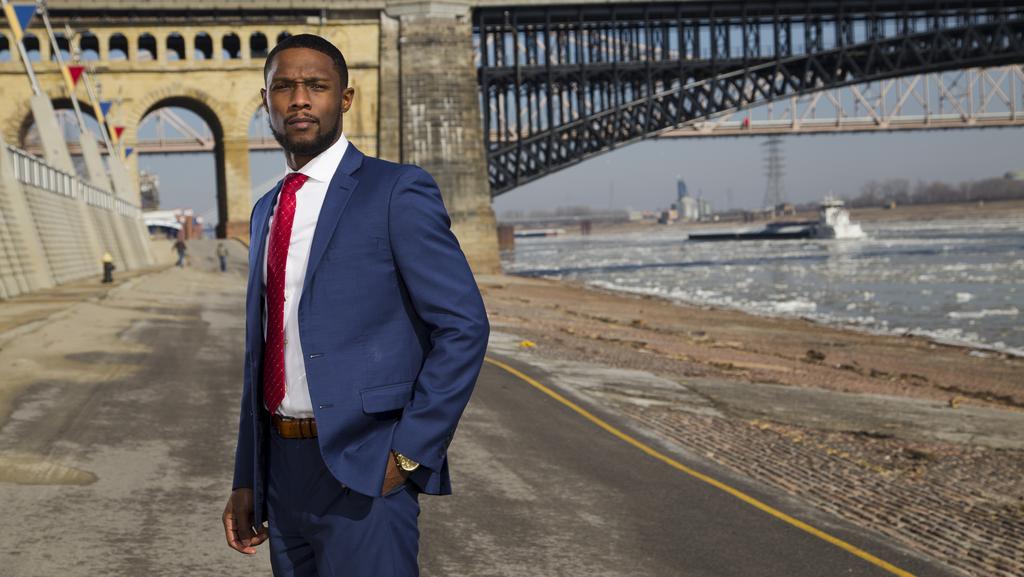 Delux’s Editor in Chief, Digital Editor, writers, and photographers is taking a moment to honor Neal Richardson, Director of the St. Louis Development Corporation. We pay homage to this brilliant leader, by sharing an amazing article from our Fall 2021 issue, written by Jasmine Osby in our celebration of “Black Excellence That is Still In Motion” Delux Series, both Past, Present, and Future game-changers.

With a grand vision, founded on faith in his community and those who reside within it, executive director of the St. Louis Development Corporation Neal Richardson is aiming to change the landscape of the city one brick at a time.

Formerly led by Otis Williams, Richardson was elected to lead the SLDC in June following a recommendation from Mayor Tishaura Jones. Fueled by zeal and passion, his youthful vigor and enthusiasm has been met with welcoming arms.

“For so long we’ve been stuck in a negative narrative around the future of St. Louis and I think, at this moment, with Mayor Jones in office and now me in my role leading economic development and neighborhood growth, I am excited to see a new era come into play,” he said.

In his new role, Richardson will spearhead a team dedicated to overseeing the 10,000 LRA properties scattered throughout the city, leading the St. Louis Port Authority, and implementing initiatives directed towards the beautification and development of low income neighborhoods in the city, specifically North City and parts of South City.

Thus far, Neal describes his new role as inspiring as he begins meeting with residents, contractors and community-based organizations to bring forth change.

“While the present is very bleak, I think the opportunity to turn the disruption and destruction into something positive just gets me excited,” he said.

Prior to joining the SLDC, Richardson spent 10 years at US Bank working in economic and community development. During that time he underwrote over 300 projects and worked with developers on some of the largest developmental projects in the country. He also created the bank’s Business Impact Group which provided greater access to capital for women, minorities and low income communities.

Richardson’s dedication to community empowerment extends beyond corporate America and into the streets through his organization Dream Builders 4 Equity. As co-founder and president, Richardson has equipped over 100 St. Louis City youth with the tools to escape poverty, build wealth and invest in their future. Richardson intends on bringing his array of multifaceted experiences to the doorsteps of city residents.

“And I will be doing that across all of my work with the SLDC as far as working with developers and community members on negotiating contracts and deals and pulling together financial projects across the city,” he said.

With a current team of three, Richardson and the SLDC will kick off by focusing on city beautification, allocation and stabilization. The team will be developing strategies for maintenancing, demolishing and selling the city’s LRA properties and implementing programs that hire contractors to stabilize those properties and get them back on the market.

Additionally, they are assembling land for larger projects such as community corridors that house commercial spaces and incubators offering business and technical support, access to capital and certifications for women and minority owned businesses.

“I’m establishing the processes to make sure that as we establish these new efforts, they’re sustained long term and it’s not just an initiative but that it becomes a part of the fabric of our city,” he said.

As proven throughout his career, Richardson continues to be dedicated to the people and desires to shift the narrative of St. Louis city in a fresh, invigorating direction. He believes people should look forward to moving back to the city.

“It’s not about me; it’s about the city itself and what we can create here,” he said.

Although his reach is expanding, Richardson still wants to tap in with St. Louis youth and lend a helping hand as they grow into the future.

Moving forward, Richardson and the SLDC will release their economic justice plan in the first quarter of 2022 and conduct extensive community engagement within the 79 neighborhoods throughout the city. They also will aggregate resources for communities with vast investment directed towards areas disproportionately impacted by the COVID-19 pandemic. The organization will roll out new branding in the new year.

“There is a revitalization coming to the city of St. Louis and I think people should start watching out for what’s to come,” he said.

Fully armed with the knowledge and tools to reimagine the future, Richardson sees St. Louis as a masterpiece in the making. A never-ending champion for people of color and the disenfranchised, Richardson is steadfast in his belief that the city will be abundant in resources and opportunity.

“What I’ve built my life and career on is turning those challenging opportunities into something very positive,” he said.

Latest posts by Jasmine Osby (see all)
Leave a comment
1006