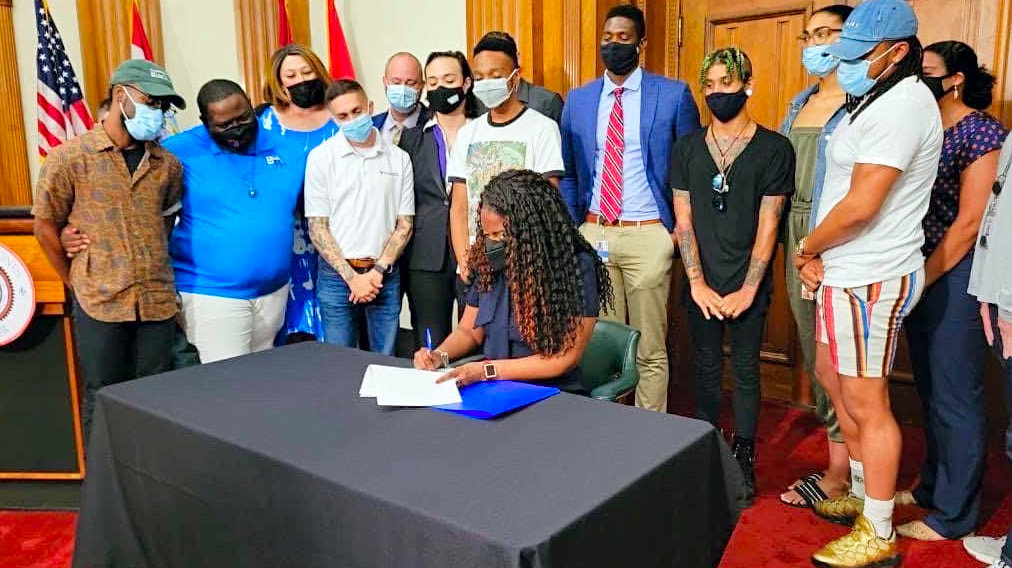 Hosted by the legendary Father Trell Chanel and legendary Father Logik Delcore, this all-inclusive ball will feature various vogue performances and competitions showcasing the best ballroom competitors from across St. Louis and the Midwest. There will also be a performance by music artist Eric Donte and a special guest appearance from Smokie Makaveli from season three of HBO Max’s hit series Legendary.

The ball is one of many upcoming initiatives rolling out from MTUG this year as the organization strives for more diversity, equality, and inclusion both in its staff and programming.

MTUG opened its doors in 2013 as a safe space for trans and gender-expansive people to visit and be supported. In addition to facilitating various support groups, the organization also does advocacy work in the community, peer advising for naming change assistance, and has a food and clothing pantry for community members to access. Under the leadership of Interim Director Michaela Joy Kraemer, MTUG is moving in a fresh direction that stays true to its core values while creating a more inclusive space for all people within the LGBTQAA+ community.

“Our trans community isn’t just our white trans folx, it’s all kinds of people and we want to meet people where they are to serve them,” Kraemer said.

Helping to spearhead the MTUG 2.0 movement is Maven Lee. The organization’s new Community Program Manager, Lee is bringing a refreshed and renewed energy to the non-profit by taking MTUG to the doorsteps of the Black community and encouraging more diversity throughout the organization. After Lee introduced Kraemer to the kiki ballroom scene, it became clear to her that ballroom culture was a necessary component in the next phase of MTUG.

“Kiki ballroom culture gives especially queer and trans youth a place to feel safe and feel comfortable and supported,” she said. “Maven really opened up the whole vision to the kiki scene that I didn’t have any exposure to before.”

A legend in the mainstream ballroom scene and an icon on the growing kiki scene, Lee has been walking in balls for over a decade. While St. Louis has had a thriving ballroom scene for over 20 years, Lee recognizes many people don’t realize the culture is alive and well throughout the city.

“When people see shows like Legendary and Pose, people have no idea that stuff happens in St. Louis,” Lee said. “They think that this is something that only happens in New York and LA, but we have it here.”

For many, the ballroom scene has served as a sanctuary for those escaping abuse, rough home lives, and homelessness. Through vogueing, these individuals were able to overcome their hardships, discover community, and live life as their true selves. While many believe ballroom houses only existed in big cities, Lee says St. Louis also has played a part in the scene.

This Friday’s Pride Ball is an opportunity for performers to compete, build their confidence, and get their feet wet in the ballroom scene. Performers have the chance to win up to 2,500 dollars in cash and prizes while walking in categories like Vogue Performance, OTA Realness, Face, and Runway. Knowing that ballroom is a gateway to confidence and self-esteem building, Lee encourages every one of every gender and background to come out and join in the festivities.

“I want to make sure people are empowered through ballroom….it can really help people in their everyday life and bring people together.”

The first step in a fresh direction, Kraemer is excited about the next level of MTUG. With a slew of advocacy and outreach initiatives, a killer events schedule including their monthly Vibe & Vogue class, and an attitude focused on inclusion, the organization is continuing to pave the way for trans inclusive community and create a space where everyone is welcome.

“This is an opportunity for us to grow that common language and get down to a human level with people and that’s what really changes the culture,” she said. “That’s what really helps people become more accepting, aware, and affirming.”

The St. Louis Pride Ball presents The Category Is kicks off at 8 PM CST this Friday. Admission is free.