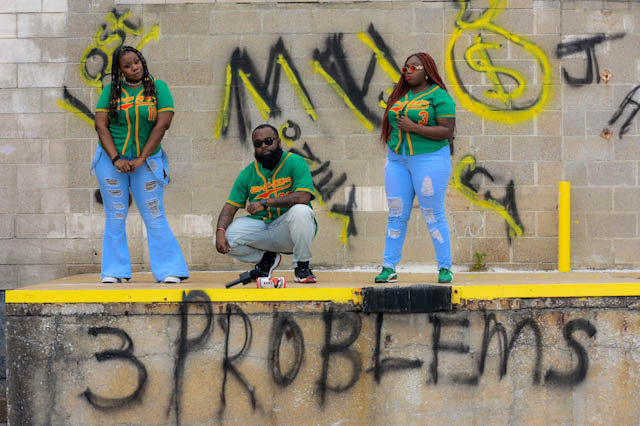 One year after launching his award-winning podcast, Ethnic Ish N More host and creator Nico Tha Great has a new respect for the power of manifesting whatever his heart desires.

An avid skater with a passion for media and pop culture, Nico started Ethnic Ish N More after he gained a lot of attention at the skating rink while rolling around in a ‘Support Black Women’ t-shirt. The graphic tee was a head-turner; attracting glances from many people who seemed confused about the slogan.

The unwanted attention around the shirt led Nico to think about how the experience was “some ghetto ish”. He liked the catch phrase, so he subbed the word ghetto for ethnic and Ethnc Ish N More was born.

In March 2019, Nico launched the pilot season of the show. Initially a Facebook Live series, Ethnic Ish N More highlighted and profiled some of the top black-owned businesses and brands in the St. Louis area. However, Nico wanted to take the show to a new level and, after receiving a motivational text from his friend Dasha Kennedy of The Broke Black Girl at the top of 2020, Nico was challenged to write his goals down and bring them to life by transitioning from social media onto a podcast platform.

“I’d honestly always wanted to do a podcast but I never did the research as far as equipment and I knew I wanted guests and didn’t want them coming in and out of my house,” he said. “Nor did I want them to have to drive all the way to Illinois.”

Despite revising the show’s format, Nico was steadfast and on February 5, 2020, officially launched the Ethnic Ish N More Podcast on My City My Music Radio, a local, online radio station based in St. Louis.

The show picked up incredible traction, becoming a weekly hub for entertainment, comedy, and insight into the amazing things happening in the city and its surrounding areas. To join his cadre of personalities, Nico selected Melanie Marie, the show’s official Bud Talk STL Cannabis Correspondent,  and Yeyo The General who’s segment focuses on love and relationships. Fueled by the show’s initial inspiration, Nico desired to have two black women as co-hosts to stay true to his core support system.

“My reason for picking two women was because the whole premise of the show came from my ‘Support Black Women’ t-shirt and the one thing I’ve learned is that the most support I get comes from black women,” Nico said. “That’s one thing about black women, right or wrong, long as you do right by them, they will support you.”

Throughout its first year, Ethnic Ish N More has been a rollercoaster ride that isn’t coming to a halt anytime soon. With a slew of incredible guests streamlining through the door, including Kyjuan of platinum-selling Hip Hop group The St. Lunatics, Nico and his co-hosts have been having everything but days off as they remain dedicated to consistently providing top-notch podcast content week after week.

The show’s consistency paid off big time last year when Ethnic Ish N More secured sponsorship from Cash App. An employee for Square, Inc, Nico manifested garnering sponsorship for the show from Cash App when he began working for the company, proving that all things are possible with hard work and belief in oneself.

After advertising his show to other Square employees, the head of Cash App’s Artists Development team reached out to him after being impressed by the quality of content and consistency of the podcast. As the sponsorship continues to develop, Ethnic Ish N More is in a position to work closely with Cash’ Artist Development team and with the company’s upcoming record label.

“What I always tell people is that if there is something you’re going to do, especially podcasting, you have to do the show every episode, whether one person is listening or a thousand,” he said. “And that was my mindset. I didn’t care who was listening, I just knew I had something to say and a message to get out.”

Since maintaining the show for over a year and, even winning the 2020 Yours Award for Podcast of The Year, Nico believes the key to running a successful podcast is consistency, manifesting your desires, and remaining passionate about your craft.

“Once you put what you want out into the atmosphere mixed with consistency and dedication, everything works out perfectly,” Nico said.

Diligent in his support of black women and black culture with an ever-resonating and impactful voice, Nico Tha Great is pushing Ethnic Ish N More into its second year with even more fervor with more amazing guests, St. Louis highlights, and even live event broadcastings. With the support of the city and his co-hosts, Nico believes syndication is the next step for the show and that nothing can stop the rise of Ethnic Ish N More.

“Be passionate about what you’re doing and don’t let anybody deter you from what you want to do,” he said.

Tune in to Ethnic Ish N More every Wednesday at 8 PM CST on My City My Music Radio.