Crown Me And Call Me Your King…. 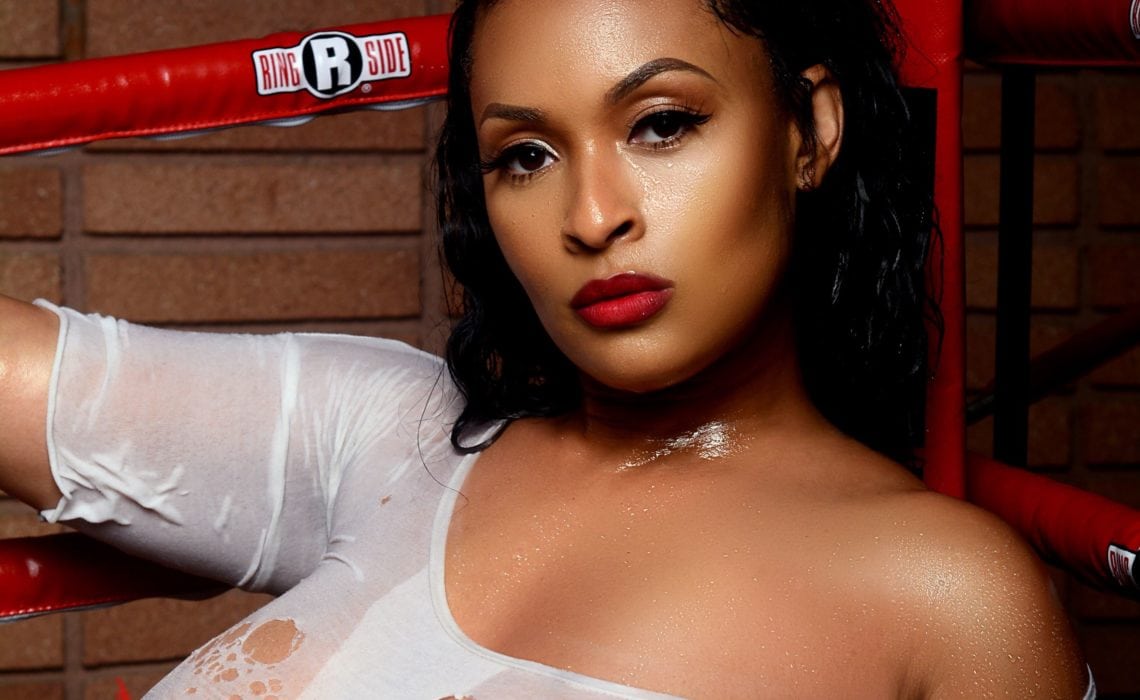 Thou shall not question or test her gangster. She is relentless. She’s driven and she’s talented. She is not a he, but she is a king, and she can flow just as hard as your favorite male rappers. She empowers women to never settle and to secure their own bag in her own lyrical way. She is Tiffany Foxx, also known as King Foxx. She’s from the STL, and she takes no prisoners when she grabs the microphone and spits her unapologetic lyrics. DELUX recently sat down with the female supernova to talk about her latest singles, If I Do It and Warzone, what’s next for her in the world of acting, and when we can expect the next Tiffany Foxx album.

DELUX: Hi Tiffany. Thank you for doing this once again. I know this was your second time being featured on a DELUX cover and we are excited to feature you again.

DELUX: You’re welcome. Well let’s get started. A lot of people saw you on Love & Hip-Hop Atlanta for a season. Tell us what life has been like since being on featured on a national platform.

TF: The situation with Love and Hip-Hop didn’t make or break me to be honest. But, I gained another fan base which was good. I will say it broadened my horizons as far as the awareness of who I am. I also like the fact that I didn’t play myself on that show because it is very easy to do so. Overall, I will say that it was a positive experience and I had a lot of fun. I do however have some other television opportunities coming up and I’ve done some other things regarding television.

DELUX: [Laughs] Well you definitely have the personality for it.

DELUX: Can you give us some insight into what those TV opportunities may be, or are they still in the works?

TF: It’s kind of in the works, but it is a show that we are filming, and I made sure we are filming it in St. Louis. So, yes, I’m doing that and it’s pretty much going to involve my family. I can tell you that much.

DELUX: Great! I’m sure that will be fun [laughs]. Okay, so there are a lot of female rappers that are up and coming these days. Tell me what it’s like being a female emcee in the industry today?

TF: I mean female hip-hop right now is very interesting to say the least. People are just kind of popping up out of nowhere like “Oh I want to be a rapper today” and it’s annoying. I’m going to be honest with you because I am a real lyricist so it’s like, “What, you’re a what?” A lot of people use hip-hop to get out the hood or to change our family’s lives—that’s the whole purpose of hip-hop. It was another stream of income. You’re telling a story about your pain and people love it. So, when people just wake up, get a ghostwriter and now you’re a rapper—then try and come for people who’ve been doing this for years—its offensive. However, on the flip side of that as a woman, if you’re getting your money and keeping it cute, it’s all good. Just don’t come for me that’s all I’m saying [laughs]. DELUX: Do you feel that’s what Katt Williams meant about Tiffany Haddish, when he stated, “She hasn’t proven herself as a comedienne?”  With you saying that about the “microwave rappers” and all. Is that what you are comparing them to?

TF: Umm, I don’t really know the depths of where Katt Williams was coming from with what he said. All I know is that he is very funny, but I don’t know what mood he was in the time in which he said it. What I will say is that this generation has more opportunities because they have different platforms to be discovered on. When I started out, we didn’t have these types of platforms like social media. I mean, everybody is accessible now. I mean you can slide in Beyoncé’s DM if you want to. Initially, we didn’t have that kind of access. With that access, they get faster turnaround because of these different platforms that open different avenues for people to see them. We had to hustle, get our knuckles dirty and put in the work. It’s not to take away from their hustles either, but it can be frustrating to people that have put in so much time and work towards their craft.

DELUX: That’s understandable. What would you say your sound is compiled of? What is Tiffany’s sound?

TF: [Laughs] Well, well, it’s so weird because I just thank God I don’t sound like anybody. I mean I have people that try and compare me to other people, but whatever.

DELUX: Okay, stop right there and I don’t want to cut you off, but I honestly thought it was you on Drake’s song Nice for What [laughs].

TF: Everybody thought that was me [laughs]. But, it was the City Girls. I had so many people tell me they thought it was me and I was like nah that’s not me. But my sound, is a lot of what I’ve been through. As women, we are emotional by nature—we can’t help it, so I’m going to be raw and talk about my pain and it’s going to get everybody’s attention. That’s why Drake be winning so much because he’s vulnerable and transparent with his music. My whole thing is female empowerment, but I do it in a way that’s telling you not to settle. I do it in a way where it’s still ratchet—still catchy—and it can even be raunchy from time to time. But I’m very lyrical, so it’s going to have substance and it’s going to talk about getting this bag and that’s my music in general. To not settle and just know your worth.

DELUX: Speaking of ratchet and female empowerment, is there a story behind your single, If I Do It?

TF: Umm it was a few stories in If I Do It to be honest with you. So, the “buy a bitch a bag or something,” part—that was dedicated to somebody. And then the top of the verse, “I once knew this trick,” all that was for one individual. Then of course towards the end, I just got colorful talking about a guy with the ten inches, and whatever. But that definitely wasn’t about the guy in the first part [laughs]. It was just me having fun, mixing real life with fantasy. You know, it was just me being creative.

Read the rest of this interview in our upcoming Fall issue!