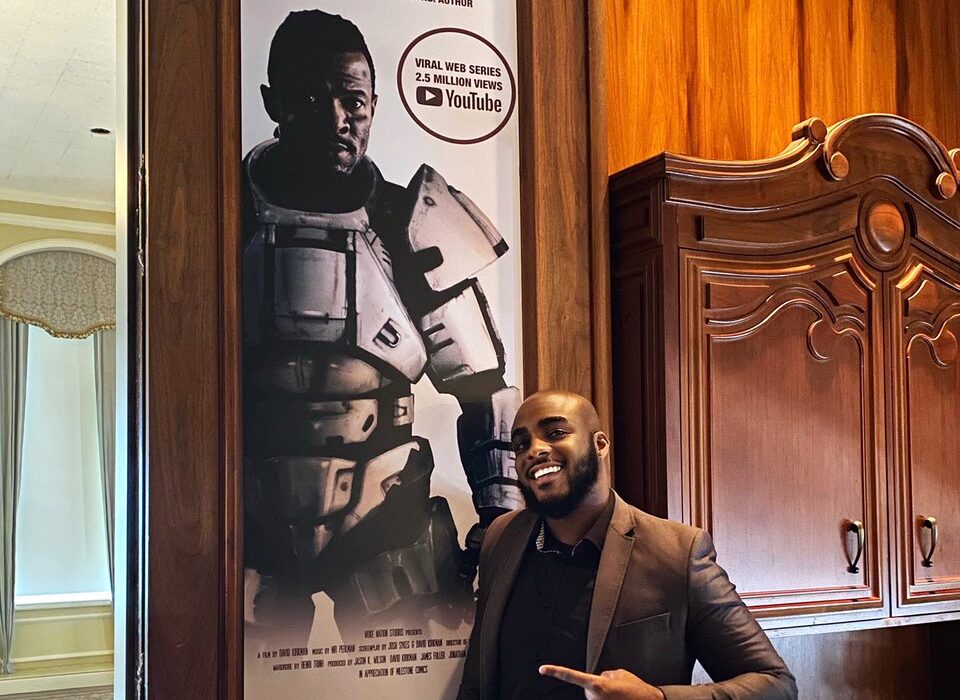 Filmmaker David Kirkman has learned the value in completing everything he starts. Last night he premiered his latest film Hardware to an eager audience.

The Ferguson native skyrocketed to success after his 2019, fan-film Static, a reimagination of the iconic Milestone Comic series Static Shock, gained virality and reached over a million views on YouTube. With fans across the world intrigued by the movie, Kirkman and his team begin travelling internationally to screen the short film.

“Static started off as a really strong passion project,” Kirkman said. “We weren’t looking to make money off of it or anything like that. It was just something we’d always dreamed about; to make a Static Shock film seriously.”

After his initial screening at the Tivoli Theater in St. Louis sold out in less than 24 hours, the success of Static was undeniable and, despite having a small budget and many obstacles, Kirkman blossomed alongside the electric aura of the film.

“I was just believing that something incredible was going to come out of it,” he said. “And it turned out it did; all of the worries and anxieties, it was worth it.”

Although he has only been working in film and cinema for seven years, Kirkman has invested in developing and manifesting his vision through his Woke Nation Studios company. His passion for creating movies was a snowball effect after seeing the film Inception starring Academy Award winner Leonardo DiCaprio. Kirkman’s desire to create that same emotion and mystery in viewers led him down the path he is on today.

His new film Hardware is the culmination of years of study into the Milestone Comics universe, a coalition of black artists and writers who partnered with DC Comics in the early 90’s to distribute their comic book content. Starring Jarrett Michael Collins, Hardware is a relatable story of a black man striving and fighting for the notoriety he deserves in corporate America.

“What I love about Hardware is this dilemma of a black man who is a genius inventor and has made all of this money for a billion dollar tech company and he just wants a seat at the table as he navigates corporate life,” he said.

Kirkman’s third film in the superhero sphere, Hardware will be his last fan-film in the Milestone Comic universe as the independent filmmaker dives into original content.

“I’ve learned alot from making these films like Static, Icon, and Noble and we’re going to go out with a bang with Hardware,” he said. “It is definitely the best one we’ve done so far!”

Like all of his films, Hardware was filmed in St. Louis in only seven days beginning in November 2020. The cast and crew wrapped production in June a month before the premiere. While many creatives are flocking to bigger cities to find success, Kirkman values the freedom in filming in St. Louis and is in no haste to leave home.

“I don’t think geographical location should confine you, so we should always think global,” he said. “But at the same time, here in St. Louis there’s a lot of upside to creating your own rules.”

As his career continues to unfold and rise to unknown heights, Kirkman is eager to share future productions with audiences worldwide; with a quick glimpse of his upcoming original, Scify work Underneath showing during the Hardware premiere.

Still in his prime as a creator, Kirkman is the embodiment of seeing things through to the finish line and oftentimes revisits a quote from Continuity STL co-founder Dan Perris as motivation to stay the course.

“If you complete whatever you’re working on, you’ve beat 90 percent of the competition because 90 percent only talk about what they want to do or they overthink it instead of just getting it done,” he said.

Latest posts by Jasmine Osby (see all)
Leave a comment
712