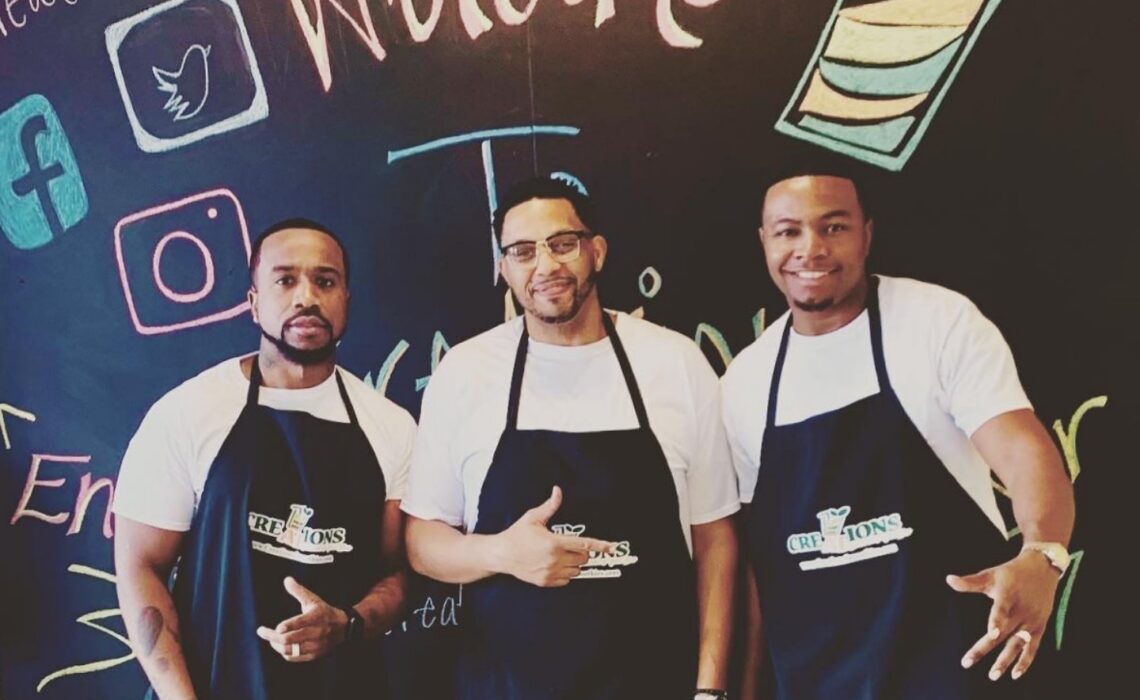 After visiting a black-owned smoothie shop in Valdosta, GA in May 2020, Thomas Neal realized that particular small business in the middle of the Peach State had a product that the world needed to experience.

The shop was called Creations Smoothie & Juice Bar and its owner, Timothy Bryant, prided himself on creating healthy, intentional beverages that don’t contain ice, preservatives, or additives. Bryant realized how passionate Neal was about his product and gave him a chance to franchise the Creations Smoothie brand and Neal, alongside his business partners Terry Bams and Jerell Robinson, opened the company’s first St. Louis location on November 14.

Located at 225 Salt Lick Road in O’Fallon, MO, Creations Smoothie & Juice Bar is an oasis of color and vibrancy with an incredible menu to match. With an assortment of nutritional smoothies and creative food options, Creations is filling a space within the food and beverage industry that has been dominated by big-box smoothie brands.

Unlike a lot of mainstream brands, Neal reinforces none of Creations smoothies contain ice; ensuring customers are getting all of the nutrients and benefits of having a fruit-based beverage. Creations also offer add-ons to enhance the smoothie experience including sea moss and Bladderwrack.

“If you go get drinks from those other establishments, you’re really getting an icy,” Neal said. “You’re not getting a smoothie because if you’re getting two whole cups of ice and a little product, you’re getting more ice than anything and that’s what fills you up.”

Creations also focuses on the intent behind the preparation of its menu items by making sure all items are made with love, care, and positive energy that customers feel when they experience their products. For Neal, ensuring the food and smoothies were created with good vibes was an important component of the brand that sets them apart from other health food-based businesses.

“We’re not just doing this stuff just to make a dollar out of it,” he said. “We’re doing it to really grow this thing.”

For Neal and his business partners, opening a smoothie shop was a new venture none of them had experienced before. But with the growing COVID-19 pandemic and people seeking ways to be the healthiest version of themselves, Creations was the perfect investment during a time where health and wellness are top priorities for the masses.

“It takes courage to do something you’ve never done before, like opening a smoothie shop,” Terry Bams said. “So it’s a different type of beast.”

Despite opening during the pandemic and encountering new COVID restrictions in St. Louis only a few days after their grand opening date in November, Creations has blossomed in its new neighborhood; developing a cluster of regular customers who have fallen in love with their smoothies and eclectic food.

Thus far, menu favorites include their Mahi Mahi tacos, Strawnana Smoothie, and the Longstory Smoothie containing strawberries, mango, pineapple, and blueberries. Whereas a lot of businesses have struggled and shutdown in the current climate, Creations has continued to grow.

As Creations continues to grow in the Midwest, Neal is encouraging other African Americans to seek out opportunities to franchise and develop businesses that already exist. Neal believes, oftentimes, minorities are late to the party in business and hopes more people realize the opportunities available right in their own communities.

“Anything can be franchised,” he said. “All franchising means is structure. So there are people who have a system in play that works and has a proven measure of success and you’re trying to tap into it to duplicate it and replicate it.”

The new location in O’Fallon is just the beginning of Creations franchise expansion throughout and beyond the Midwest. The brand aims to open 10 more locations through St. Louis and Illinois by the end of 2021 and have a gameplan for rolling out new items, including wraps to rival their beloved tacos.

Neal likens Creations Smoothie & Juice Bar to major brands like Coca-Cola, reiterating that all it takes is for people to believe in an idea for it to elevate to its highest heights.

“Coca-Cola convinced enough people to say their idea was good and it became Coca-Cola,” Neal said. “But it’s just soda; it was an idea. You have to convince enough people to believe in what your product is and then it becomes that thing.”

As Creations enters into its second full month of business, the brand is looking to continue expansion both with additional locations, beginning in Florissant, expanding its menu, and bottling its secret sauce that takes every dish to a new level.

Long term, Creations Smoothie & Juice Bar aspires to be the number one choice for healthy food options both in and surrounding the St. Louis market by impacting one customer at a time and all three co-owners hope more African Americans will see the benefit in coming together in business to work as a collective unit.

“Creations Smoothies will be the next big thing,” Bams said. “No different from Tropical Smoothie Cafe, Smoothie King, or McDonald’s.”