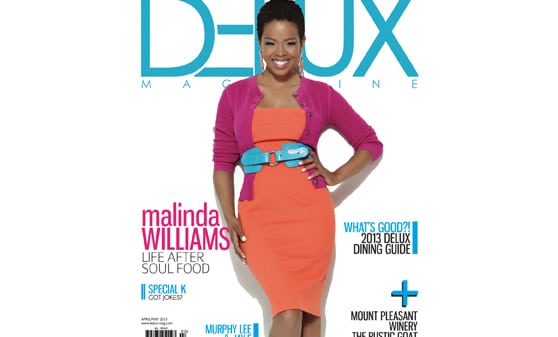 We all know her as that woman with the naturally beautiful smile, bright spirit complimented by a vibrant personality. Being a veteran in the entertainment industry as one of the most successful African-American actresses, Malinda Williams brings us up to speed on her career, life and love. Williams starting out as a model at 10 years old, and acting at 12 years old, she knew what her calling was. “An actress is not what I wanted to become. An actress is what I have always been. The skill came naturally. What I did learn was the business aspect and that’s when I decided to make it my career.”

Williams admits with a smile, that she’s aware of the popularity of her character “Bird” she portrayed in the HBO Television Series ‘Soul Food’. “I love when people refer to me as Bird. That’s actually a compliment to me. Acting is what I have always wanted to do, so why not love being referred to as such a loving character?” Williams exudes her positivity and loving qualities in various ways. Being a close friend of families dealing with Autism, Williams is always there to support. Although Williams isn’t an advocate for Autism, she is an advocate for love. “I am adaptive in most environments. I always know how to find happiness. Content with being single, I don’t need anyone to complete me. I’m not looking but I’m also not opposed to dating anyone.”

Williams is focusing on loving the most important aspects of her life right now, herself and her 13 year old son Omikaye Phifer, of actor Mekhi Phifer. “My priority is my son. It’s family first. As an actress who is also a mother, it is not any different from being a mother working in any other industry. It is a challenge in any aspect. Within every family, it is important to give our children the proper environment to grow into a successful individual,” says Williams. In relation it has been revealed that Omikaye is not a fan of the spotlight like his parents but he is passionate about filmmaking.

Williams is apart of an all-star cast for a recent film being aired Easter weekend on TV One titled, The Undershepard,” written and directed by Russ Parr. The cast of “The Undershepherd” also includes Isaiah Washington (“Grey’s Anatomy”), Lamman Rucker (“Meet The Browns”), Elise Neal (“Belles,” The Hughleys”), Vanessa Bell Calloway (“Shameless”), Clifton Powell (“Ray”), Bill Cobb (“Go On”), Robinne Lee (“Hitch”), Keith David (“Belles,” “Cloud Atlas”) and Academy Award winner Louis Gossett, Jr.  The stimulating film exploring the underbelly of power and corruption in the church premieres Saturday, March 30, 8PM/ET and Sunday, March 31, 5:30PM/ET exclusively on TV One. “Working with Russ Parr was amazing. Russ is generous, humble and a very talented man. He respected the fact that he was working with seasoned veterans in the industry and was always open to our suggestions. Russ had an amazing piece with an all-star cast so things just intertwined perfectly,” Williams states. In The Undershepard, Williams plays the first lady of the church. Her role in this film is a bit darker than what her fans are accustomed to. “Playing the first lady was challenging because it’s a dark piece. That’s not typically my role. Having a cast that was so supportive helped a lot. I went to a place I never had to go to when acting in a film. But I will say people will find inspiration from The Undershepard, especially those people who are going through similar situations,” William says. That is confirmation why we love Malinda Williams.

Any role that she plays, her audience is touched. She advises upcoming actresses to respect the entire industry when coming up. “The entertainment industry is challenging. You have to want to be in it for the right reason. Also remember for every one person in front of the screen, there are fifty people behind the screen making it happen. Respect everyone involved. Keep it all in perspective, and be persistent. Believe in yourself, even when no one else does.”

Beauty
Melvin Rodriguez: The “Man Behind The Brand” Reveals His Secret Sauce To Building A Multi-Million Beauty Empire
Beauty
5 Reasons WOC Should Shop at CoilBeauty.com﻿
Beauty
5 Afro-Caribbean Brands You Should Know About