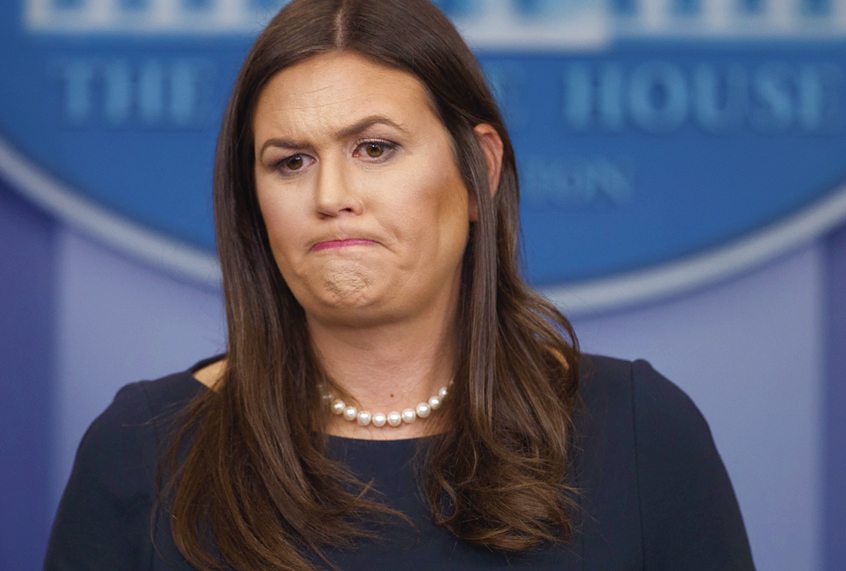 It’s no surprise that the White House has weighed in on the recent police shooting of Stephen Clark, and the ruling of Baton Rouge officers who killed Alton Sterling. What’s more shocking is that people had the expectation that the administration who has pretty much ran the entire country via Twitter would have some rhetoric that didn’t skate along the lines of idiotic and insensitive.

With that being said, let’s review what Sarah Huckabee Sanders aka the unfortunate soul who constantly gets tomatoes thrown in her face, had to say.

Now let’s break this down, which won’t take long since she basically repeated the same thing over and over. Once again, proving the expansion of this administration’s brain doesn’t extend very far, and to keep from getting caught with their pants down (like many times before), or lying, they just repeat the same thing.

After the reporter asked her the initial question of what the President is saying about the recent shootings, particularly the shooting death of Stephon Clark, she responded with this dismissive response,

“The President feels these are local matters and should be left up to the local authorities.”

After rolling my eyes as hard as I could, I was left on the fence about her comment. On one hand, I was pissed off that the standard of the White House had been flushed down the toilet. Our country, though never really great is definitely a load of crap now. Personally, I did not like her dismissive tone regarding the tragic incident, but I can’t say it wasn’t expected. This administration fully stands behind racism. They ran on the racism platform, and #45 continues to spew racist remarks, so should we really expect anything different?

Yeah, I didn’t think so.

Nevertheless, the part about it being a local matter is a double-edged sword and must be handled carefully. I know, you’re probably thinking, “Sis, where the hell are you going with this?” Hear me out though. When you think about what she said, on one end she has a minute point. And by minute, I mean Ant-Man, when he shrinks down to his tiny self minute. These kind of issues are handled in city and state courts, not federal. City and state officials are handling these unfortunate situations, not federal officials. What’s the solution to this you ask? Yep, you guessed it…VOTING!

Though a lot of us feel a certain type of way about voting, this is where it really plays an important role. I know you’re probably saying, “They rig the voting machines, they steal elections, and blah, blah, blah.” Let’s cut the BS though, a lot of black people don’t vote unless it’s for the presidential election. Hell, most of us don’t even vote then.

Sure the Presidential election is important, and I’m not negating that in any capacity, but the mid-elections are twice as important. These elections that have our Aldermen, Mayors, judges, district attorneys, and prosecutors on the ballot are the elections that most (not all) of us don’t show up for.

Moving on to her next comment. After the reporter asked her about President Tang being pro-police, his weeding out bad policing comments, and Eric Garner’s case she answered with,

“Yes, the President believes police officers should be carrying out the letter of the law, but in these specific cases, these should be left up to the local authorities. It’s not something for the feds to weigh in on.” Did you see what she did there? Yep, she pulled the old cloak and dagger, divert the answer back to what I said the first-time trick. Because let’s be for real, #45, his administration, and the Justice Department could care less about the police shooting black people.

Now again, I hate to pull a Sarah Huckabee and repeat what I said, but I must return to the not voting aspect.

The results of this decision are prosecutors who are pro-police, and judges who have disliked minorities for generations winning. The outcome of not voting is a getting stuck with a Mayor, who often appoints the Chief of Police, who may not have the integrity or balls needed to hold officers accountable. All these people have an agenda. They are here to keep pushing the agenda of “eliminating Black folks, deport Mexicans, and let’s make America White Again.”

On to the other end of that double-edge sword regarding her “not a federal issue” comment. Since this seems to be reoccurring instances, there needs to be some federal accountability. At some point, somebody who is obviously overpaid and sitting in the Justice Department should say, “Wayment, something about this ain’t right. All these mofos aren’t fearing for their lives, and if so, why is it only with black people?”

Somebody, needs to make some noise and say, “This s*** stinks , and it’s time we get our feet dirty and step in it.” But, in the spirit of good ol’ Sarah Huckabee, I revert to my comment of why not voting is hurting us. Because President Tang won the election, what did he do? Yep, you guessed it. He appointed more racist people to fill the ranks and carry out their agenda. Jeff Sessions has been called out several times about being racist among other things. Coretta Scott King wrote a nine-page letter 20 years ago urging for him not to be appointed to a federal judgeship position. She knew first-hand what he was capable of, still he was appointed to the very department who during Obama’s era was stepping in and investigating these police shootings.

I say all this to say, I wholeheartedly believe there needs to be a federal investigation into these shootings, but with Sessions who is pushing for harder drug sentences, that won’t happen. The reality is our government simply doesn’t care about us. They never have and they never will. Black people are not important enough for them to make a big deal about these deaths.

And this is where we, Black people must step up and say enough is enough.

We must to do better with voting. We must do better at showing up to community meetings. We must diligent with challenging local leaders who show up to our doors during campaign season, but don’t do a damn thing when they win. It is imperative, and life-threatening for us to educate ourselves on who’s listed on these ballots and show up to vote.

The White House, the President and Justice Department don’t give a damn about us. They are perfectly fine with coming up with some damaging narrative to villainize us while going on with their daily lives.

Yes, it was immoral, unprofessional, tacky and extremely biased for the White House to say this, but again, what did you expect from a President who showed compassion towards the tiki-torch, “peaceful” protestors in Charlottesville?

READ: OFFICERS IN ALTON STERLING MURDER WILL NOT BE CHARGED…..NO SURPRISE HERE