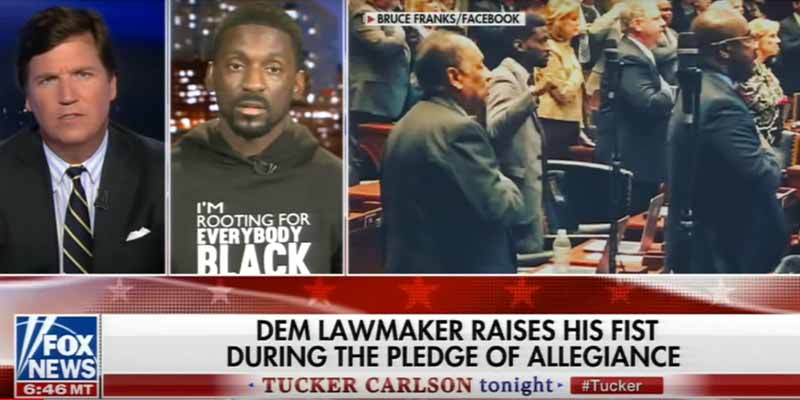 One of our favorite real life super heroes Rep Bruce Franks was interviewed last night by Fox News’ talking head Tucker Carlson on Tucker Carlson Tonight in a segment entitled “No Allegiance”.  The purpose of the interview was to discuss the viral image of Rep. Bruce Franks raising a fist during the pledge at the first legislative session of the Missouri law making body.

In the interview Carlson pounced on the hoodie he wore which read, “I’m Rooting For Everybody Black” by asking if he would be offended if Frank’s would be offended if he wore a hoodie that suggested the opposite. I’m not sure if he was ready for such a succinct response from Franks but it seemed to throw the Conservative show host off just a bit. Moving on to the image itself Franks, explained that he raised his fist, in honor of his own pledge, a pledge to the people – all people.

Other highlights in the interview for me would be Franks bringing up the socio-economically depressed in this country. When asked if he was against America or to clarify his position in not pledging allegiance to the flag; Franks made certain to state, “I am opposed to folks in economically distressed communities being treated differently in America”. The entire interview seemed a good example of the dialog that needs to exist between persons, not ideologies, and not parties. For me personally, Bruce Franks quotes should be engraved in the minds and hearts of every elected official, “I pledge allegiance to the people”.