One City, One Voice: The People’s Ribbon-Cutting Ceremony 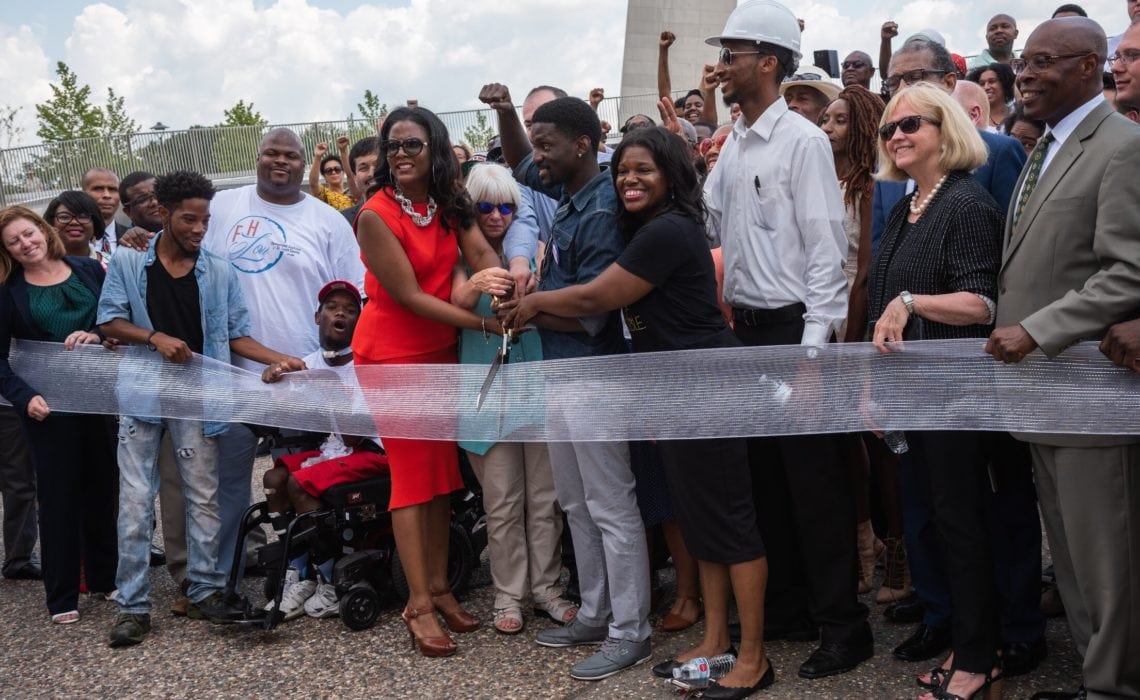 On Friday, I attended an event that left me in a place of uncertainty. On one hand, I was proud to be a part of something that my people spearheaded—proud of the outpouring of unity that exuded from the crowd. My people saw something that needed to be corrected, demanded change, and acted on that change. There was no lingering social media complaining that turned into no action—they acted—righted a wrong, and put together a historic event together in just three days. But on the other hand, I was disappointed that I had to even be at something like this. Not disappointed in my people who organized it—I was disappointed in my city. Disappointed in the fact that even in 2018, we were still here—black and brown people were still fighting and demanding to be treated equally.

As the political cat and mouse game was played, my uncertainty began to ring a little louder. Speakers acknowledging elected officials like Mayor Krewson and other first round ribbon cutting attendees, who sought to attend hoping to possibly atone their actions and place a band-aid on the intentional neglect from several days ago—for the sake of playing nice.

Settling into my seat, I begin to shed my barrier, as one speaker after the next delivered a phenomenal speech. I listened attentively as City Treasurer, Tishaura Jones informed the crowd of the role in which she and the voters played in the Arch project. She paid homage to Percy Green and the impactful role he played 54 years ago—protesting for minority participation in the Arch construction. Jones reminded everyone how like Green and many others, we are still fighting to be included. What touched me deeply was when she reflected on the realization we as a City we’ve been talking about racial equity in St. Louis since Ferguson, yet we are no further than we were four years ago.

“We have to stop leaving our racial equity lenses at home,” Jones said, “St. Louis as a whole needs to change.”

After Jones held her accountability mirror up to the city, while demanding the city take some responsibility for the major role it plays in the ongoing racial divide. Then State Rep Farrakhan Shegogg walked up to the podium and gave a raw, unapologetic step up or step back speech that reverberated throughout the crowd. “It’s time to do work,” he said, as he pointed out local and state elected officials needed to be more responsible for the trust voters have entrusted in them. He shined a light on past and present elected officials who have peddled votes from residents only to win and neglect the duty they are obligated to fulfill. Shegogg dismissed those who are critical of the new voices and their methods—ordering them to either join in on the movement or move the hell out of the way.

Once he finished, Cori Bush, candidate for U.S. Congressman and event organizer stepped to the podium. In a prevailing and uncensored manner, Bush pointed out the City’s lack of respect given to what Dred and Harriett Scott fought for in the old courthouse across the street. She exposed the ignorance of this city who ignored the history of slaves who were sold downtown on the courthouse steps, on Broadway, Locust and Clark street. Her message was clear to those who may not have understood, “We are not afraid, we are not running, we are here, we demand equality and we will get it.”

Though everyone’s speeches left nothing unsaid, Terry Wilson delivered a powerful speech from 1st District Councilwoman, Hazel Erby that summed up the event, the events that led up to it and my battle with the remaining uncertainty I was feeling. Through him, her tone was clear and not to mistaken for anything.

“I would like to thank Bruce Franks, for recognizing and addressing this injustice immediately, as well as Tishaura Jones, Rasheen Aldridge, Farakkhan Shegogg and Terry Wilson. I support this event wholeheartedly, however. We should not be here today to protest the exclusion of African American from the July 3rd Arch Ribbon Cutting Ceremony.

Nor should we be here today to accept an apology for being excluded from the ceremony, because there has been no apology. Apologies are for accidents, like bumping into someone or inadvertently stepping on someone’s foot. What happened here was no accident!

Apologies for things done intentionally, that are not accidents, require the offending part to be contrite, that means they have a feeling of regret and guilt. Contrition also requires the offending party to atone for the offense are not contrite and they definitely have no plans to atone.

Our reason for being here today should be on behalf of the African American community to reject the cynical PR stunt that’s being called an apology. This so-called apology isn’t even for us, it’s for the perpetrators, to make them feel better about what happened here July 3rd. In a city that is over 45% African American, and has many African American elected officials!! This was inexcusable!!

So keep your apologies, we will not let you add insult to the injury.

But I am sorry, sorry that when it comes to civic and political leadership the event on July 3rd is the best St. Louis can do!”

After challenging the intentional exclusion, the embedded racism, and the sheer hypocrisy of the so-called diversity—the people, my people came together to laugh, chant and show the world that this was not a do-over, but a better way to do it.

That’s the place I call home.