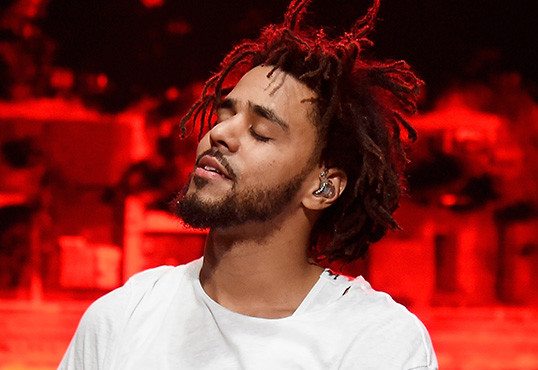 You hear so many different opinions about J. Cole’s music sometimes, so it seems like the critics are often searching for a reason to discredit his career. The reality of the situation is his team understands fan engagement. His fans respond accordingly and in return J. Cole sells a lot of records. This sounds like an elementary statement—but its actually very real. Recently, I kicked it with Interscope Records’ A&R, Sickamore at Harvard University. He mentioned Drake, Kendrick, and J. Cole as the top sellers of today, and people were genuinely surprised for some reason.  I personally predict by his next record the numbers will be even greater.

Cole also produces his music and gives hits to other artists with ease. But let’s discuss the phenomena currently on display with his latest record. Indeed it does appear the big three currently in hip hop is Drake, Kendrick, and J. Cole. Many hip hop fans and blog sites often attempt to treat Cole’s career as if he’s the bastard stepchild of the big three. But, fans of his Dreamville imprint have morphed into a demographic of their own.  He can write his own ticket and his fans are largely responsible for this wave.

These are the children produced by the commercial hip hop explosion of the late 90’s and early 2000’s. The generation that listened to both Diddy and Mos Def—combined with the generation that believes 50 Cent is their Tupac. Drake is a monster and before its all said and done they’ll write history books with entire chapters detailing his run. Kendrick—before its all said and done, will surely be mentioned as one of the greatest artists of this generation. But, I feel like there are a few nuanced factoids, we unintentionally fail to uplift when J. Cole is brought into the fold of this conversation. We can holistically discuss the creativity behind the record, and the sonic landscape provided by the music in  a separate piece. Though I find it strange that these numbers are not being celebrated more by hip hop in general.

Very few mainstream artists take the type of creative risks attached to this record. Once again, Cole comes through with a full length concept record that has no features. The production style isn’t your typical trap beat—808 Migo flow music. He addressed an onslaught of controversial issues and subjects in his lyrics. He dissed white rappers, mumble rappers, politicians, the IRS, law enforcement, and still sold a jaw dropping amount of records.

We can’t really say his roll out involved any type of monstrous radio singles. Yes, Drake is the king of the streaming culture at the moment. It’s almost not even a fair discussion when you pair his numbers against other artists. Kendrick is maybe the most creative rapper alive, and he does it while out selling nearly everyone in the genre.

However, if this is a nuclear arms race, then 64.5 million streams in a goddamn day is worthy of being discussed a tiny bit more than what I’ve noticed taking place on black Twitter. Add the fact that he did it with no features and suddenly, KOD is a freak of nature within its own right. When I first heard he did these types of numbers I listened to the album back to back. I like Cole, but I never expected him to do these types of numbers. I mean these are record breaking, pop star level type of statistics.

I scratched my head in disbelief partially because this actually reminded me of the day I heard Eminem’s “The Marshall Mathers LP” for the first time. Suddenly, the inquiry surrounding rather or not this specific individual is the best rapper alive or not deserves our collective attention. When you do these type of numbers public opinions become slightly more obsolete than they used to be. People love to mention numbers until you actually start mentioning real numbers and the cultural implications attached to the numbers. So many highly skilled underground emcee’s drop records reminiscent to the messaging of Cole’s “KOD”, but none of them break the internet to this capacity. Personally, I’m a fan of a good barbershop argument about hip hop. We could throw rappers like Black Thought and Royce da 5’9 in this conversation easily in terms of lyricism. We could argue the overall cultural relevancy of the Migos at the current moment. We can talk about legends like Kanye, Jay-Z, Andre 3000 and Nas.  We can speculate about Swae Lee’s solo record and its potential. We can also discuss sleeper cells like the lyrical giant Killer Mike. But when its all said and done—J. Cole basically had the type of weekend many emcee’s spend our entire lifetime chasing.

Similar to Nas, we’re dealing with a rapper that talks about whatever the hell he wants on a track by track basis. We’re dealing with an artist that doesn’t struggle for validation from his female fan base. There’s a secret ingredient worth studying inside his messaging and it connects with people on a massive level. He does it all while really rapping and spinning unconventionally creative concepts in his songs.

Combine all of the aforementioned details with the fact that his record label Dreamville has silently assembled a super dope roster. Cole has signed bubbling acts such as— Earthgang and J.I.D. —so I’d dare to say we’re witnessing the early formations of a f**king problem.

He’s not making music for the hits or the quick singles, so he won’t die with the trends. We’ve seen this before but not quite so quiet, yet so loud at the same time. If you’re paying attention you could say his entire career has gone this way. Every time he’s up to bat, he hits a home run and its seems like people on the internet are asking themselves how the hell did J. Cole sell so many records again?

Things are interesting in hip hop right now, Drake could drop a new record any day. Cole has the approachability of the common man, but he’s actually a certified superstar. Kendrick becomes more iconic with each release. We’re looking at a arms race for the crown in hip hop right now. Who’s the best emcee Kendrick, Drake or J. Cole? This question is indubitably becoming the millennial version of the “Biggie, Jay-Z, and Nas” hip hop holy trinity. This week we have to give J. Cole his props for making history. In the streaming culture, the climate is completely unpredictable, so who knows what will happen next week.

Numbers don’t validate skills, but when an emcee has skills and the numbers to support those skills, it gets real. Add an engaged fan base willing to support high quality content, then we’re dealing with something totally different than the norm.

I’m not going to comb through the man’s entire catalogue stat for stat, but realistically this is a conversation a few people in hip hop aren’t ready to have for some reason. J. Cole just did 64.5 million streams in a weekend basically. Read that sentence again and repeat it to yourself.

RELATED ARTICLE: J COLE AND DRAKE WILL DROP ALBUMS IN TIME FOR SUMMER