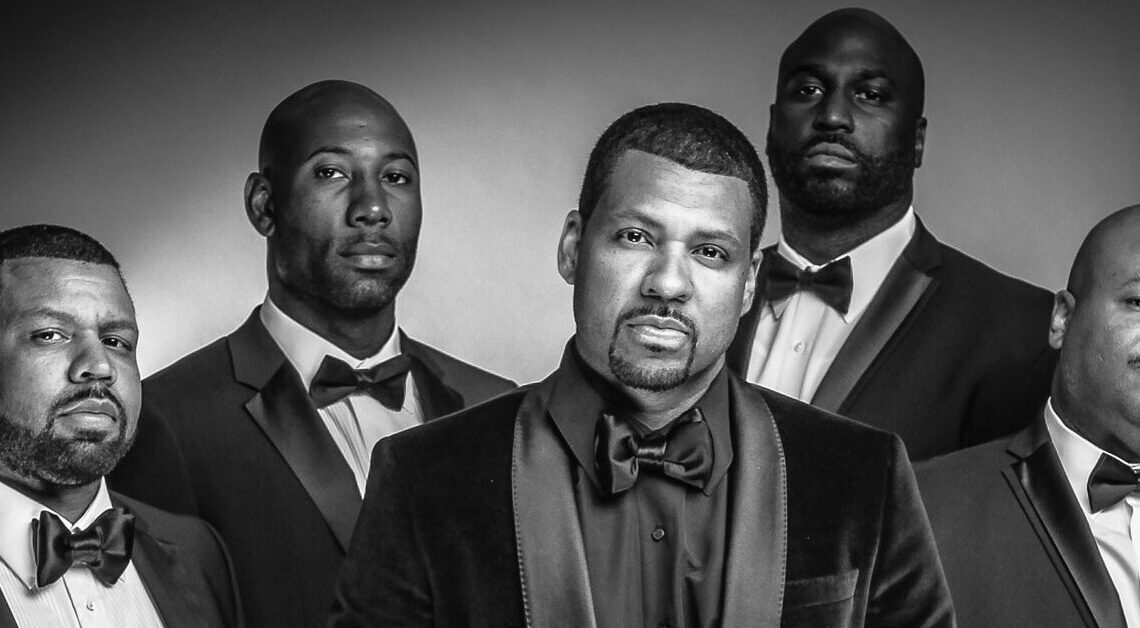 A BAND OF BROTHERS: THE DELUX MAGAZINE STORY

When the five founders, Keith Griffin, Kyle Griffin, Brian Shields, Michael Winfield, and Lawrence “LB” Bryant all came together, they combined their skills and networks to collectively create one of the coolest publications in the city. With limited experience and understanding of the publishing industry, the Delux team faithfully fought through trials and tribulations to defy doubters who didn’t believe in the power of five brilliant young creative forces who came together for a common cause.

Delux began as an idea inspired by the creative insight of creative director, Michael Winfield—more popular under the name Brooklyn Kingsborough—identified a niche market in St. Louis. Perhaps an adult magazine was in the making, perhaps not. Either way, there was a void in the local publishing community and a new magazine could be the way to inspire the creative culture of the city. “I had friends who had magazines and websites, and they were adult orientated. I thought the concept was good, but design-wise, we could do something better. I didn’t realize—at the time—that adult entertainment wasn’t the best thing that would work in our region,” Brooklyn reflects.

“It might have worked, but we did what we did in the community, so when we’d tell people we’re starting a magazine, they’d be like, ‘Oh! That’s going to be the voice of the city.’ We’d look at each other like, ‘oh,’” original editorial director, Brian Shields, recalls.

Publisher, Keith Griffin added, “The city actually created the magazine. When we were putting it out there, we weren’t giving all the details and the next thing you know, it turned into this lifestyle brand. It’s crazy.”

Armed with absolutely no journalism or publishing experience, the five fellas embarked on a risky journey to create a magazine that catered to the affluent urban audience often overlooked in cities across the country. At a time where magazine sales were at an all-time low, Keith stepped out on faith and the core crew focused on pooling their resources to assemble a talented team that could help bring the vision into fruition. The picture he painted ignited interest of amazing people who worked together to build the Delux brand. Talent including photographer, Demond Meek; artist and graphic designer, Jenn Carter; sales and marketing director, Terran Freeman; and writers, Tiffany S. Nashville and Seven L. Maxwell were instrumental in the development of the aesthetics and editorials, which fused together to lay the solid foundation needed to offer a premium publication for the city to celebrate.

“That first issue, we were just trying to figure it out. We didn’t know about paper texture. We didn’t know about weight. The printers were like, ‘It’s 80 pound paper vs. 60 pound.’” Keith continues, “I was like, ‘I don’t know what any of that means. Just send me something nice, the size of Jet Magazine….’” “But we didn’t want it to be stapled,” LB added as everyone unanimously agreed.

“We were Delux, we had to be the best!” Keith exclaimed. “Everything that came with Delux—including the branding—was really a mixture of all five of us. There was no one boss. The magazine had something that we all brought to the table. It was always about everyone’s opinion. Even when it came down to the small stuff like the website. Everything was always a team effort. I think that’s what made us successful.”

“That’s probably the only reason the publication survived. Outside of us just pooling our resources, we were a group of dudes who enjoyed kicking it with each other.” Brian added.

“The thing about Delux is it’s just cool. We didn’t have the experience in journalism. We just did what we wanted to do and hoped people would like it. They ended up liking it because it was cool.” Brian continued, “We’re some cool cats and we do cool shit. We’re artists, we’re clothing makers, we throw parties, we run magazines. Delux has always been cool. So if you’re cool and you get a copy of the magazine, you’ll appreciate it. We try to make it for those who appreciate it. We don’t want to force people to like it.”

“When we first started we thought we would diversify St. Louis. We thought we’d be the Delmar Loop of publications; everybody’s going to want to read us. Unfortunately, that’s not how the cookie crumbles,” says Keith. “We tried to diversify. Our first cover had SLIM and Joe Edwards on the cover trying to show a unified, diverse St. Louis. Hopefully one day we’ll get to that. But that business model didn’t work.

“We had to stay true to who we were and cater to the affluent trendsetters and tastemakers of our generation. We couldn’t try to be something we’re not. We were more focused on looking at our editorial concepts than saying, we’re 80% Black and 20% White. We were trying to make it 50/50 and it wasn’t working. It was more work than it was fun.”

“One day hopefully, the world will get there, but you don’t see many magazines that try to cater to everyone. They find their demographic and niche. I think that’s what we needed to do. We got better and better with each issue, but at first it was just a wild pitch,” Brian noted about the magazine’s evolution into the publication it is today.

The success of Delux did not come without its share of hard times. Sure, the city supported the quality of the publication, but they also questioned the tangible copies. Everyone wanted to put the publication in their hands, but the limited run of each issue lead to speculation that they weren’t being printed. Sales were in a slump, and like all budding businesses, early supporters were looking for free advertisement. “The support was there until we started asking for money,” Keith adds, “When we first started, there were a lot of donated ads. That’s just how it goes. You have to show people you have a quality product. You have to show the consistency.

“Then it was time to put that media kit together and say, ‘I gave you the last three issues for free, I need you to pay XYZ to get in there’, and that’s when the problem starts.” Keith added.

Favors and freebies always lead to failure in business, and since Keith assumed the financial responsibility to keep the publication afloat, he put everything behind his brand and continued to push the publication.

He had all but given up on his dream to see Delux make it to the next level. Even as the founders started to branch out and focus on their individual goals, Keith studied more aspects of the industry—learning areas that included graphic design, photography, and online publishing—so his obstacles did not overcome his drive to succeed. Just when he’s about ready to give up, he’d find away to revitalize the publication.

While maintaining the integrity of each issue and ensuring it’s availability to the international audience, Delux developed an iPad app that kept the consumers connected. This transition helped to open the magazine to more readers that span beyond the boundaries set by simply printing the publication. With each issue averaging about 149,000 views, and averaging nearly 5000 print copies bi-monthly to distribution points that include retail locations, Delux Magazine has expanded its reach to markets that include Atlanta, Kansas City, and St. Louis—but it doesn’t stop there. “The major thing that’s going to drop in the Fall/Winter is Delux TV. We actually have a station that will be online and on television,” Keith reveals. “It will be localized for St. Louis’s art, lifestyle, and music scene. It will be an extension of Delux Magazine.”

With the magazine’s distribution reaching record audiences and the magazine’s appeal to both local and national advertisers, the Delux team took a moment to reflect on their journey. In an emotional moment, Keith opened up stating, “Everything is self-taught. We didn’t take extra classes. We didn’t have mentors. It was just trial and error. I’m so proud of these guys. They hung around when there was no money. They were there. They pushed through, and they persevered. If I fell short, they always stepped up and took the lead.

“They’ve been to the bottom with me, and I am pleased to know Delux helped to elevate them to various levels of their own careers. LB is still with the magazine, but he’s also grown into shooting billboards, concerts, and major artists like Jay Z. Brooklyn gets his art out everywhere. Bryan moved out of state and launched own publication and started marketing large-scale events. Kyle has his clothing line, Millionheir Clothing. The fact that they have grown so much makes me so proud of them.”

“Looking back, one thing we all did was played our role, but at the end of the day, Keith funded everything. I was kind of the liaison between the creative side, sales, and Keith. I battled on both fronts,” Brian reflects. “There were times when I was frustrated with him, but I didn’t understand a lot of the things he did until I started my own magazine. I don’t think I had enough appreciation for the things he did until I stepped out on my own. When I stepped out, I’d call him for advice.

“I went to the school of hard knocks, and that was Delux Magazine. I learned a lot. I learned how to work with people, I learned how to be an executive, and I learned how to play my role. I’m still learning. At the end of the day, if it didn’t work, we were all hurt because we were all in it, we’re all brothers, but financially, we weren’t hurting. He assumed all the risks of launching this publication.

“We all learned what we learned and got the confidence and the knowledge to step out on our own and start these other businesses. As each of us stepped out, we maintained the support of our brothers. We provided a platform, and once everyone branched out to make that next step on their own, the magazine was still there to support it. I can call any of them at any time, and that’s how you know it’s real.”

“Everyone has to grow. You can’t be stuck in one spot. You must evolve.” Brooklyn adds.

“But I think at the same time, he wanted everyone to catch up with him,” LB jokes.

“At the end of the day it’s all worth it,” Keith closed.

It’s been over five years since the inaugural issue of Delux Magazine hit the hands of the trendsetters of the St. Louis community. Since its inception, Delux has been an ever-evolving voice for the affluent urban communities that have embraced the message that was created for the mainstream minority. Although each member of the team has branched off into focused aspects of their own careers, each of them remains connected through the brand they built together—forever bound together as a band of brothers. Together the things they’ve accomplished have surpassed the limits of their imagination. Their struggles and success tell their unique story, and together they’re working to expand their brands while forever supporting each other through it all.