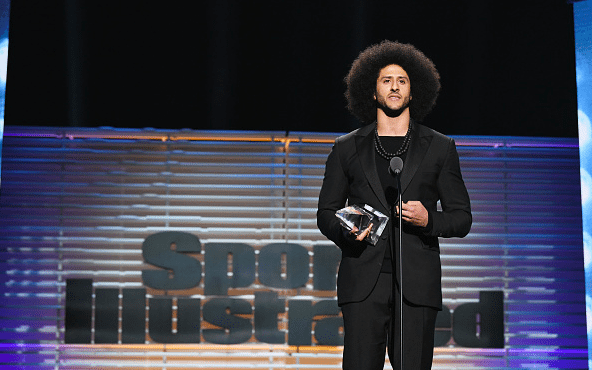 There were several athletes honored Tuesday night at Sports Illustrated’s award ceremony, but they weren’t the highlight of show. Former 49ers Quarterback, Colin Kaepernick was honored with the Muhammad Ali Legacy award. The ceremony took place in the Barclay’s Center where Kaepernick was praised for carrying on the late boxer’s legacy with activism.

Almost a year and a half ago, Kaepernick took a stand against police brutality and racism, by announcing he would no longer stand for the National Anthem. His protests sparked outrage and support across the country. Many stood in solidarity sitting for the anthem while others criticized the QB for using his platform for political reasons.

“He mentored me without ever meeting me,” Kaepernick said about Ali’s activism. “The footprints he leaves are large, and his life is and has been a multi-textured tapestry that is rich in love, wisdom, life lessons and human kindness. I can only hope that I’m taking steps toward walking on the footsteps that he has left behind for the world to follow.” Kaepernick’s actions and stance coincide with the late boxer’s regarding his refusal to enlist in the Army to serve in the Vietnam War. Like Ali, Kaepernick has received professional and political backlash since protesting the National Anthem.

Though his actions have not gone unrecognized. Several celebrities have supported him throughout his protests, along with fans and other activist organizations. One of them being Queen Bey herself as she presented Kaepernick with his award after being introduced by Trever Noah.

“Colin took action with no fear of consequence or repercussion, only hope to change the world for the better,” Beyonce said. “To change perception, to change the way we treat each other, especially people of color. We’re still waiting for the world to catch up.”

Both Beyoncé and Noah have openly spoke out about racism and police brutality in support of Kaepernick. The former 49ers opted out of his contract in March, but continues his charity work and activism within the community.

READ: COLIN KAEPERNICK IS THE REASON WHY I’M BOYCOTTING THE NFL