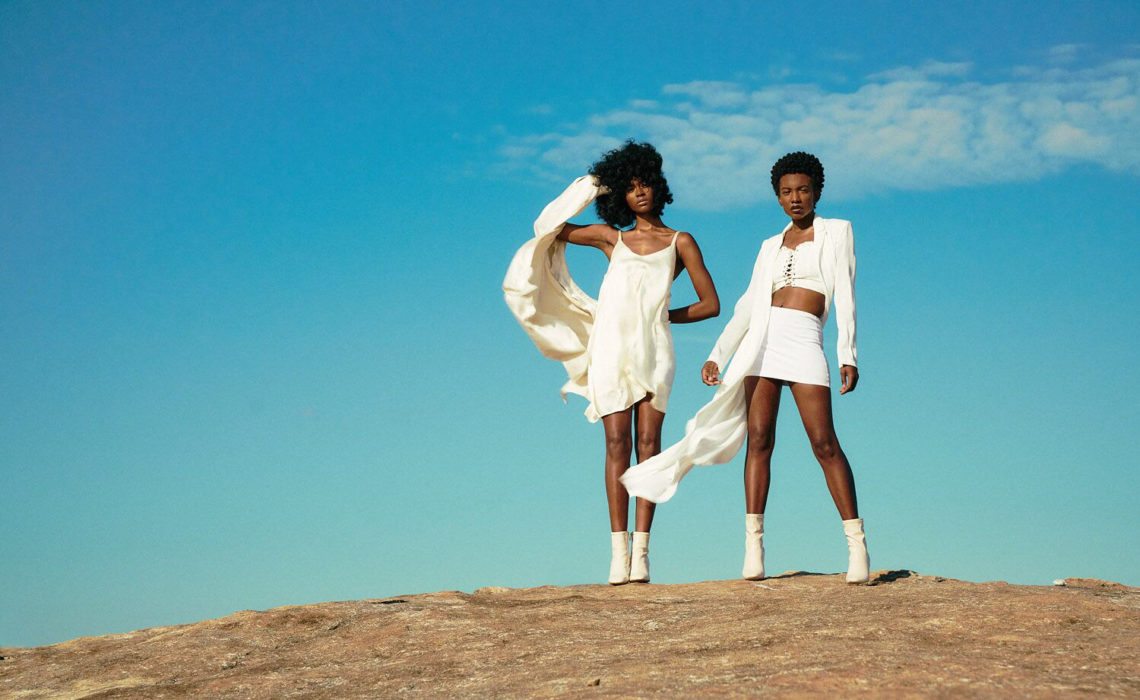 In today’s world, artists have the capability of capturing the eyes and ears of audiences and music execs from stages or their living rooms. Through a variety of new ideas, sounds, and creative platforms—they can reach a multitude of people by simply being different and standing out. In a society engulfed by social media—music has become about more than just music.

It’s about freedom and self-expression. It’s about creating new lanes and reaching new platforms. Music is a gateway to feeling better and restoring hope. For the eclectic duo, Alex Belle, and Isis Valentino, this was the case. Starting out, the Georgia peaches found their sound in the basement of a local boutique they worked. Combining their talents from songwriting and instruments—the two formed their group, St. Beauty. A name that embodies how they view themselves and their music.

DELUX’s Editor-in-Chief caught up with the Wondaland singers to talk about their new album—Running to The Sun, whose music they’re jamming to, and what’s next for St. Beauty.

DELUX: Hi Alex and Isis. How’s your day so far?

ST. BEAUTY: Hello, so far so good. Thank you for having us.

DM: No problem. Let’s get started. Tell our readers how you came to be St. Beauty?

ALEX BELLE: We met at a boutique local called Poor Little Rich Girls in Atlanta. We were both employed there. At the time, the company started putting together talent showcases that we were helping with. I had written a song I really wanted to perform and thought the showcases would be a great opportunity for myself. Eventually, I asked Isis if she knew anyone who could play the guitar and she offered to learn or come up with some cords for the song. The performance was a success and from there we started writing songs, composing music, and performing together.

DM: Your name is very different, and I’m curious about where it came from. Is there a meaning behind it—or something you came across and liked? How did you come up with the name St. Beauty?

ISIS VALENTINO: I had written a song called St. Beauty before we had gotten together. Once we’d gotten together, we were trying to think of names to call ourselves. I just remembered St. Beauty—it was feminine enough—it was called beauty—and the saint part was like something to believe in. It just felt right for us. [Laughs] Alex didn’t like it at first. We eventually took it to Twitter and did a poll to see if people liked the name. In the end, I feel like it means pure beauty and having something to believe in. DM: What are your individual personalities like that make your duality blend so well?

IV: I’m kind of a jokester with a little spice added—but I’m still chill, cool. easy and an all-around kind of person.

DM: There are so many different genres and subgenres in music now. Can you describe your sound to our readers? What genre of music would you say your music is compiled of?

AB:  We decided to come up with our own genre because we didn’t want to put ourselves in a box when it comes to other genres. We thought the word confetti embodies our music. We decided on this word since we felt confetti has a lifeline. When it blows out, there’s this moment of excitement. And then, when it falls, there’s this moment of being in awe. Even after it falls, it’s still on people’s clothes and heads—or on the ground—or swept and throw away. We felt like all the different phases of the confetti—it embodies different moods and emotions—which is what we convey throughout our music.

DM: Who would you say musically influences you individually and as a group—you feel you use to channel your creative energies?

IV: It’s kind of hard to pinpoint one influence since there are so many from different decades. I would say I love Stevie Wonder. For instance, the name St. Beauty—that name was inspired by a Stevie Wonder song called, Bird of Beauty. I always wanted to learn how to play an instrument from listening to Prince—who inspired me to do that. I know how my voice sounds, so listening to artists who have the same voice as I do and being inspired by them too.

AB: It’s kind of hard for me to choose. You know what, it’s not [laughs]. Well actually, I’m very influenced by Nina Simone and the strength in her voice—and the fact she always wrote about things she was going through. In high school, when I knew I really wanted to pursue music—I was and still am very inspired by Kid Cudi and SantiGold. I think those three artists really influenced on how I go about making music today.

To read the rest of this interview, please download a copy of our summer issue here.