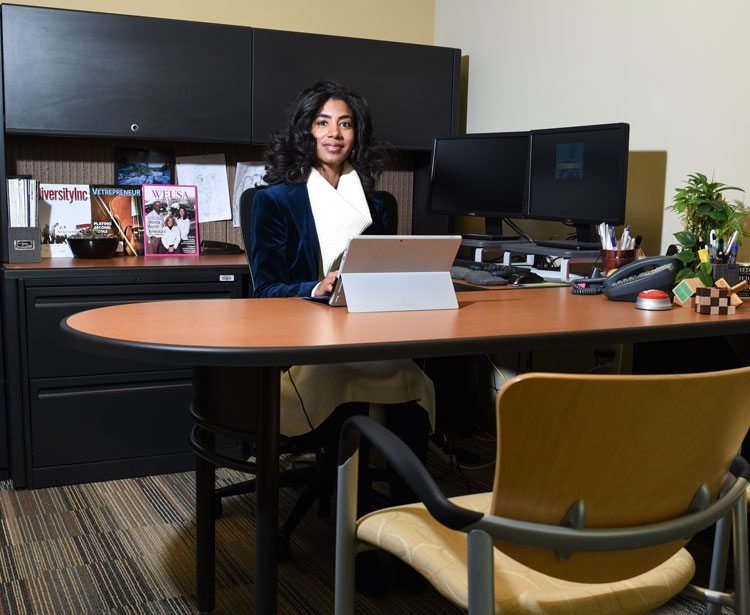 Knowledge, drive and passion are three characteristics every employer dreams of their employees having. They are also terms to which you would use to describe a person on the move, a person making strides to be better versions of their self while helping those around them improve as well. The moment I met Kendra Burris–Austin, I knew she embodied the very essence of what each word meant. What started out as a crazy Friday for the both of us turned out to be a very enlightening conversation regarding her contributions at Express Scripts, and plans to bring awareness to how important supplier diversity is to companies. After spending years with some heavy hitters throughout Corporate America; Burris-Austin was handpicked off of Linked-In to fill her current role at the company. As the Director of Supplier Diversity, Burris-Austin’s role is building a program around the company’s clients and the community. A major part of the Supplier Diversity role is centered on the businesses Express Scripts interacts with, especially diverse businesses.

“Building a program is not an easy thing to do. Although, Supplier Diversity is an undervalued proposition; I am making inroads to illustrate its value and importance to companies.” –Burris-Austin

As our conversation continued, I listened to her explain how important it is for Express Scripts to absorb the needs of their clients so they are able to enhance the communities they are planted within. As a Director of Supplier Diversity, Kendra Burris-Austin views her role and program in the form of an outreach program and works hard to maintain high contact with not just suppliers, but the community as well. Keeping her ears to the ground while her handshakes form lasting business relationships are what make her job interesting and fulfilling. With a workforce of 70% women, 30% minority, and 12% bilingual; Burris-Austin is proud to be a part of a company who mirrors the diversity they seek out in other companies.  As the demographics of our country changes due to population increase and other factors; she explained how the focus for more diverse vendors and companies will be in demand. Constantly faced with millions of consumer expectations, Burris-Austin understands the responsibility she is tasked with delivering on. Her conversation is full of confidence as she speaks highly of how she truly loves what she does and continues to find ways to aid other companies in growing their supplier diversity divisions as well.

You would think building programs and dealings with major corporations would be enough, but not for Burris-Austin as she strives for excellence and to build a better community. Continuing her work beyond the walls of Express Scripts corporate headquarters, Burris-Austin was nominated this past December to serve as the Board Chair for the St. Louis Minority Business Council. Demonstrating that being proactive extends far beyond the regular 9 to 5 shift; she plans to be an essential part in restructuring the organization as it moves in a new direction. As our conversation neared the end I asked this incredibly driven woman where she saw herself in five years. To much surprise, she smiled and simply stated she didn’t know. She reflected on a post she had previously made regarding the question, paused and then continued with stating that regardless of where she is in five years; she will leave whatever she has left in a better place than what it was.

I smiled at her response simply because I couldn’t have thought of a better way to answer that question. It was a combination of uncertainty and spontaneity, yet hopeful of good things to come. As we closed I could see and hear the passion she had for her job and the things she would soon be doing to move Express Scripts in a positive direction. At that moment, I knew if we never crossed paths again it wouldn’t be the last time I would hear Kendra Burris-Austin’s name.