Gent by Brainchild unveiled St. Louis’ men’s fashion on Thursday night at the Majorette with a sold-out production coming off of a pause in 2018 due to the pandemic. Founder and creator of “Gent by Brainchild” Dwight Carter put on a phenomenal production that was a well-executed show with the likes of Terrill Keith (Model Liaison Expert) orchestrating the flow of the runway. Dwight added fashion power-houses Paulie Gibson, Love Is One, Lukas Roe, and YING YING YING to deliver a fashionable and memorable message.

“Without designers, there are no fashion shows, there’s no fashion scene, there’s no retail, no models, there would be nothing for them to wear, so it’s imperative to support our designers.”

With the ambiance set and fashion goers seated, it was now time to introduce the latest masterpieces worn by an eclectic array of models. This runway featured quite a few legends off of the runway, like football wide receiver superstar CJay Boone, who walked in his first show on Thursday night he had this to say;

” It was an amazing experience, had me a bit nervous when I was driving to the venue, but I have a very outgoing personality and I am easy to work with and talk to, so I soaked up everything I could over the six hours and I feel like I killed it and the crowd enjoyed me too. I spoke to a lot of people and they said “this is made for me.” I want to thank Mary and Jeff at Mother Model for giving me this stage to be great on, and I am looking forward to more.”

Model/Actor veteran Leland who has been in the modeling industry and acting since 2015 tells us;

“I love absolutely everything about the Gent Designers Showcase. I have been a model for this showcase since day one.”

Model Pierre had this to say about his first runway experience;

“The event was great I was happy to finish my first runway modeling experience. Great environment with great people involved. I was a little anxious at first, but when the lights were on I was dialed in and ready to perform.”

“We (Ying Ying Ying) we’re so honored to be a part of such an iconic St. Louis designer showcase, the Gent Show! We love any opportunity to show off our creative works and expand our audience. Paulie, one of the original designers at the Gent Show has been an inspiration for us since day 1. We hope to be a part of the show again in the future.“ 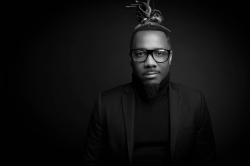 ML Hunt
Editor in Chief | Chief Operating Officer | Marketing Strategist at Empowered Strategy
ML Hunt is the COO of Empowered Strategy. Empowered Strategy is a marketing agency based in St. Louis that is focused on creating omnichannel strategies for brands seeking to reach their consumer base in a comprehensive manner. We have a concentration on helping brands target the urban market and African American core.

Latest posts by ML Hunt (see all)
Leave a comment
778