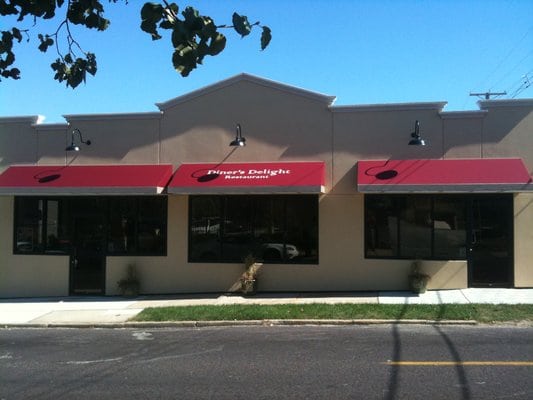 I had to stop by last night to give it a try. It’s been on my to-go list for a while now and last night I was feeling kinda “blah” so I decided soul food might be the answer to my problems….food therapy, mmmm the best kind of therapy (cheaper than paying a shrink too, if you’re eating at Diner’s Delight.)

It was about 7:30pm or so by the time we got there and some of the food was already sold out. Thankfully they still had fried chicken, mashed potatoes, and mac n cheese. Those were the three things I really, really wanted to try. Oh yeah, and gravy/cornbread as well! They have a menu that changes every day but the one common item on the menu for every day is fried chicken, and thank god for that. I love their fried chicken.

More specifically, the fried chicken had a really crispy breading which was seasoned with some type of spice blend. I have no idea what was in it, but it was magical. Sweet, salty, and a hint of something else….? The chicken inside (I had white meat breast with the wing… the dark meat with the leg is slightly cheaper, FYI) was really juicy and not dried out at all. It had a great flavor. Because we ended up stopping by another place on our way home, my food wasn’t really hot or even warm anymore by the time I ate it…but like Tracey W. mentioned, it didn’t matter! I could have taken the time to heat it up but I was so starved that I didn’t care. And it didn’t even matter. STILL GOOD even cold!

The mac n cheese was kind of a disappointment for me but maybe that’s because I prefer my noodles a bit more…firm? It tasted “OK” but wasn’t earth-shatteringly good but it somehow still “went” with the rest of the food I got if that makes any sense at all…. As in, it wasn’t too rich and it wasn’t too heavy/sickening to eat (like the Shaved Duck’s…still good though) but that was probably a good thing because the mashed potatoes were very heavy. Not sure if I would get the mac n cheese again right off the bat simply because there are still other side I want to try like the mashed yams/sweet potatoes.

The potatoes had a nice creaminess about them without screaming “we were made with only heavy cream and lots of butter!” (But maybe they were?! Gasp!) They were smooth and had some other flavor to them which I cannot describe….as if they were cooked in the same vessel which cooked meat or a vegetable. Or maybe it was just seasoning? Who knows. Either way these were some of the best mashed potatoes I’ve ever eaten in my life and I liked that I didn’t feel ultra ill after eating them. I could only finish about 1/2 of the serving they gave me though, btw. SO FILLING!

The gravy was SO freaking amazing. It had a rich, savory, hearty,….meatyyyy flavor to it. It went perfectly with the mashed potatoes and chicken. There was a chunk of meat in the gravy so I suspect it came from the porkchops that were also available that night. (Sooo on my list of what to try next from D.D.)

The corn bread was like a little pancake! Such an unusual way of making cornbread but I really liked it! Makes it easier to eat in the car on the ride home, that’s for sure. It was a tiny bit dry but not sure if that’s standard or if it had been dry from sitting out all day.

Service was great too, btw. The guy helping me out was younger and really nice. He accidentally under-charged me for the white meat I got and I told him I’d pay the correct amount but he said no worries since he already punched it in the register. He handed both Sean and I pens, business cards, and menus and told us to not be strangers. My entire meal was less than $8 which was an incredible price considering I could have only eaten that whole thing for my only meal in one day and not been hungry at all for anything else because it was so filling!

Oh man, Diner’s Delight…..y u so good?! I am already plotting (yes, plotting) my next trip to this place because I can’t stop thinking about it. That’s how good it was. I am scared to imagine how many calories I ate last night but now I know that one meal from this place is so filling (and cheap!) that I could eat here once a day and not have to ever eat again for the entire rest of the day. It’s like a one-stop calorie intake/feeling of fullness for me, lol! Oh yeeeah! [yelp Kate B]