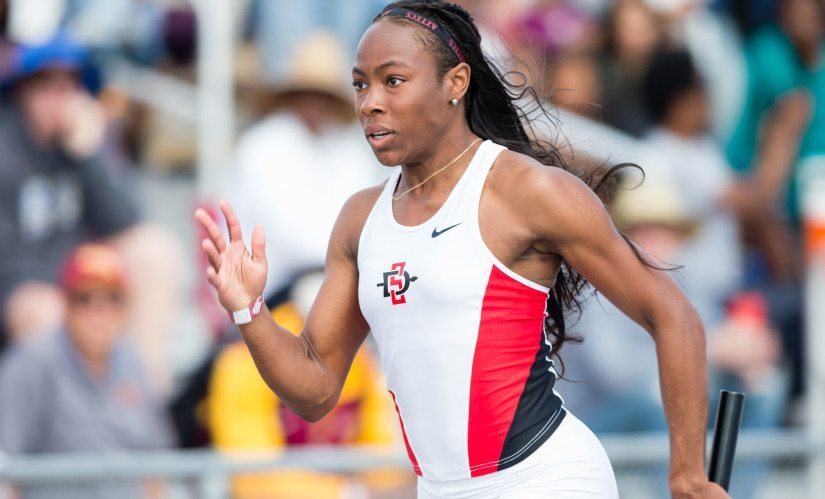 We caught up with our 2017 ‘Emerging 30 Under 30’ Inductee -world class sprint sensation Ashley Henderson and guess what she’s up to?

St. Louis native Ashley Henderson had a full weekend running at the NCAA Outdoor Track and Field Championship, the West Region preliminary round. Henderson who is a junior at San Diego State University where she is seeking her degree in communications, with her heart set on law school after graduation.

When I spoke with Henderson I asked her -what is your motivation? “I look to God, my mother, and my family, she said, “I do this for them. I would say continually surprising myself each time I hit a new PR that I thought I would never hit, that’s what motivate me.”  When asked -is Tokyo and 2020 on her radar? (-she smiles) “Yes, she said, ” qualifying first is what’s important, but the 2020 Olympic Games is on the list, but for now I’m focused on what’s coming up.” (NCAA Championship) “I was looking at old photos of myself when I was seven, yes I’ve been running that long” as she laughs, “and I had little beads in my braided hair, and I never expected that little girl to run all the way into such a successful place”, she said. When asked about running running sub-11 seconds in 2016. -“That changed my perspective,” she said, “when I ran a time I never thought I could ever do. I couldn’t break 12 (seconds) in high school when girls were running in the low 11s. When I ran 10.95, it was, like, wow.

“It changed my whole life after that moment.” -Henderson

Henderson qualified for the 2016 U.S. Olympic Trials in the 100 and 200, the decision was made to run only in the 200. Ecstatic, but exhausted from the length of her college season, she qualified for the semifinals and finished 20th. Not defeated, Henderson dusted off her spikes with a smile on her face and got back to business! Now, we fast-forward to May 2017 where a San Diego State track and field junior named Ashley Henderson set a school and meet record in the 100-meter dash, where Henderson stamped her ticket to the NCAA Outdoor Track and Field Championship in Oregon. In the 100-meter dash, Henderson posted both a San Diego State and NCAA West Prelims record with an 11.01 time, Henderson also qualified in the 200m with a scorching time of 22.35 and Henderson is also an intricate piece on a very successful 4x100m relay quartet. Henderson is looking forward to representing St. Louis, San Diego University, and her family at the NCAA Championships in Oregon on June 7-10. Henderson leaves us with this;

“It’s not your talent that determines your fate, it’s your character, and going into nationals I feel good, I have good vibes, energy, great support system, and physically I’m in great shape!” -Henderson

ML Hunt
Chief Operating Officer | Marketing Strategist at Empowered Strategy
ML Hunt is the COO of Empowered Strategy. Empowered Strategy is a marketing agency based in St. Louis that is focused on creating omnichannel strategies for brands seeking to reach their consumer base in a comprehensive manner. We have a concentration on helping brands target the urban market and African American core.
Latest posts by ML Hunt (see all)
#AshleyHenderson #TrackAndField #Ashley #Henderson
Leave a comment
1829