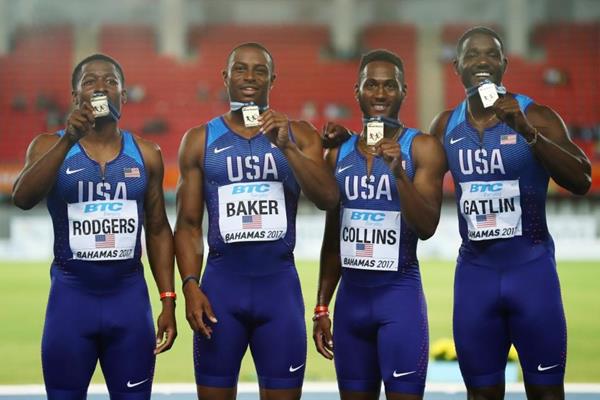 It was 2015, the US scored an upset over longtime adversaries Jamaica in the men’s 4x100m at the IAAF World Relays, Ryan Baily’s celebration gesture afterward while staring at Usain Bolt proving as memorable as the defeat the Jamaicans encountered. (Image by Getty Images)

To many, the success when proved to be, an alarming win, the US men destroyed and placed a blemish on the record books of Usain Bolt and his Jamaican relay dominance four months out from the IAAF World Championships in Beijing. Now, we fast-forward two years later and coming off of the 2016 Olympics we are at the precipice of greatness in a space and moment with the return of Mike Rodgers and his relay powerhouse quartet anchored by veteran, world champion, and Olympian Justin Gatlin!

Now we are here, with the return of our US team to Nassau with the intentions on placing the team at the top of the podium successfully defending the one title they still hold over their Caribbean rivals. The race will be the opener on the first day of this historical meet here in Nassau, with a strategic selection carefully assembled by the US solidifies their preparation for action. It includes Mike Rodgers, Justin Gatlin, Marvin Bracy, Leshon Collins, and Ronnie Baker.

The quartet led by veterans Mike Rodgers and Justin Gatlin proved to be the perfect combination for success, dominance, and humility running a blazing 38.43 besting world leaders Jamaica, China, Canada, and Great Britain to name a few. Taking down the entire field Mike along with his teammates made a statement to the world on April 22, 2017, solidifying that the US are now the kings of the 4x10om sprint relay! St. Louis Native Mike Rodgers tells us “The win was a great feeling, we had great exchanges and for the first time running with a new team I was pleased! Now it’s time to go back home, rest up, hit the reset button, and get locked in for the pro-circuit to get prepared to make the team in June for the London World Championships.” (Mike Rodgers)

You can get all the latest updates on Mike Rodgers and Justin Gatlin and many other Olympians at www.freeagentllc.com where ‘Olympians Live’ you can follow on all social media at @FreeAgentGroup

ML Hunt
Chief Operating Officer | Marketing Strategist at Empowered Strategy
ML Hunt is the COO of Empowered Strategy. Empowered Strategy is a marketing agency based in St. Louis that is focused on creating omnichannel strategies for brands seeking to reach their consumer base in a comprehensive manner. We have a concentration on helping brands target the urban market and African American core.
Latest posts by ML Hunt (see all)
Mike Rodgers
Leave a comment
2268