American Skin: Why It Failed to Tap into My Black Imagination

American Skin, while attempting to be provocative left me feeling emotions that I have felt so many times before—annoyed, irritated, and triggered. For me, prior to watching, I had a sliver of hope the message would strongly resonate with me. Or at the very least leave me wrestling with what I had just witnessed, neither was achieved.

In watching films like this I often remind myself of the targeted audience; of who the creator is directing their message to. Now, by no means am I saying do not watch this nor am I judging one for their emotions or perspective around it. I am merely one voice, with one perspective. Let me attempt to offer a bit of that perspective, now.

Art is subjective, it is meant to provoke thought and emotion. It can and will be dissected or critiqued by the audience. It can bring forth folx to move into action and invoke change. For me, I can say that this film has brought forth further clarity and affirmation around the art I want to both digest and create.

I am no longer interested in continuously subjecting myself to things that reminds me of the traumatic plight and experiences of Black people in this country. While, I recognize our stories of the Black experience must be told and the truths of these stories are often filled with pain and rage, I dare to push.

Push as it pertains to fictious storylines. Push to expand our imagination. Push that if we are going to promote and create art as a counter to these truths such as ‘American Skin’ and the film I love to hate, ’Queen & Slim’ then why leave us with outcomes that are not a counter at all. Why does it almost always end with the trauma and pain? Why can it never end with the joy, triumph or in this case revenge.

I know I am not alone in the curiosity around viewing American Skin being partly due to the alluding that justice would prevail, by any means. That the Black man would avenge the death of his son, another victim of state violence, by any means.

In the film, Nate Parker’s character, Linc even poses the question—”why are we {Black people} always having to call for peace?”

Instead, of the revenge story many of us were either overtly or covertly hoping for, we get another showcase of Black and Brown humanity. The most intense part of the film shifts into this showcase by way of dialogue that begs the viewer to understand the Black experience as it relates to policing and the systems of justice in this country. It becomes a film that shows and promotes Black and Brown folx humanity. In the end it becomes a film that creates space for the other side. For the soldiers that withhold these oppressive systems to promote and show their humanity as well.

Dialogue that aides in a diversity tool if you will.

I know some are reading this asking “what’s wrong with that?” Nothing. There is nothing wrong with promoting our humanity, but why must Black folx go to such great lengths to do so. Why must we always expose our wounds, our tears, and get the perpetrators and offenders of our oppression to see that we are not inherently bad people. That we are some of the good ones.

Why must we carve out space for the perpetrators and offenders of oppression and injustice to show us they have a soul, too. While, simultaneously killing us.

If Black creatives are going to play with ideas that liberate Black folx, if nothing but in our imagination, then shoot for the stars. Allow us to feel liberated in the beginning, middle and most importantly the end. Too often in the end we still manage to appease those who don’t see us and don’t care to. We are careful to not make things too uncomfortable for the audience or risk the consequences of what such creation and promotion can do. Can we be successful and live with the aftermath of such consequences? Or are these consequences merely perceived in our minds?

The mind of an oppressed psyche. The minds of Black folx. For some of us we can’t imagine beyond our traumas or pain. Our imaginations won’t allow us to see resistance, liberation and joy but so far.

I push myself daily to re-imagine. I do work in social justice and so much inspiration comes from the “what we want the world to be”. I live by an ideology that is rooted in liberation by way of transformation and not reformation–which ultimately means I believe we must destroy and rebuild to see true change.

As one who has curated art shows and art exhibitions in the city of St. Louis for a little under a decade, I am pushing myself to curate and create art that promotes this resistance, joy and liberation. Art that pushes Black folx to want more. For us to not accept business as usual. I am not saying we ignore reality or that we re-write history. However, I am saying if we are going to digest art then let’s digest art that inspires us to re-imagine and re-envision our lives, our Black experience.

Art that can push us to re-imagine our realities in the country. Push to dismantle all these systems that did not have us in mind and build ones that we create. Imagine and envision liberation that is not just abstract but concrete. To do it radically and not passively. To see beyond the narratives that have been placed in front of us.

Imagine our existence with an abolished prison system and police state. Imagine not subscribing to capitalism and consumerism because its rooted in exploitation. Imagine our babies having access to quality public education. Imagine access to quality and affordable healthcare for all. Imagine everyone making a living wage. Imagine quality and affordable housing for all. Imagine us thriving and not simply surviving in this country. Imagining and believing that it can be real and most importantly, achieved.

An existence where a 14-year boy doesn’t get killed in real life or on film by an officer because of bias and hate with no consequence or repercussion.

An existence where a 14-year boy doesn’t get killed by one that looks like him because of the environment and circumstance in which he lives.

An existence that has joy that is un-fleeting.

I want art that makes me feel that, abundantly. 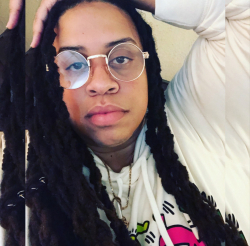 Kristian Blackmon
Guest Contributor at DELUX Magazine
Kristian Blackmon is a STL native who is a community organizer, activist, art curator, creative and lover of Black folx. Her work is centered in fighting against all the ways in which oppression forms & the liberation of Black bodies & Black minds. She was a 2019 Delux Magazine Power 100 Awardee.

Latest posts by Kristian Blackmon (see all)
Leave a comment
1181